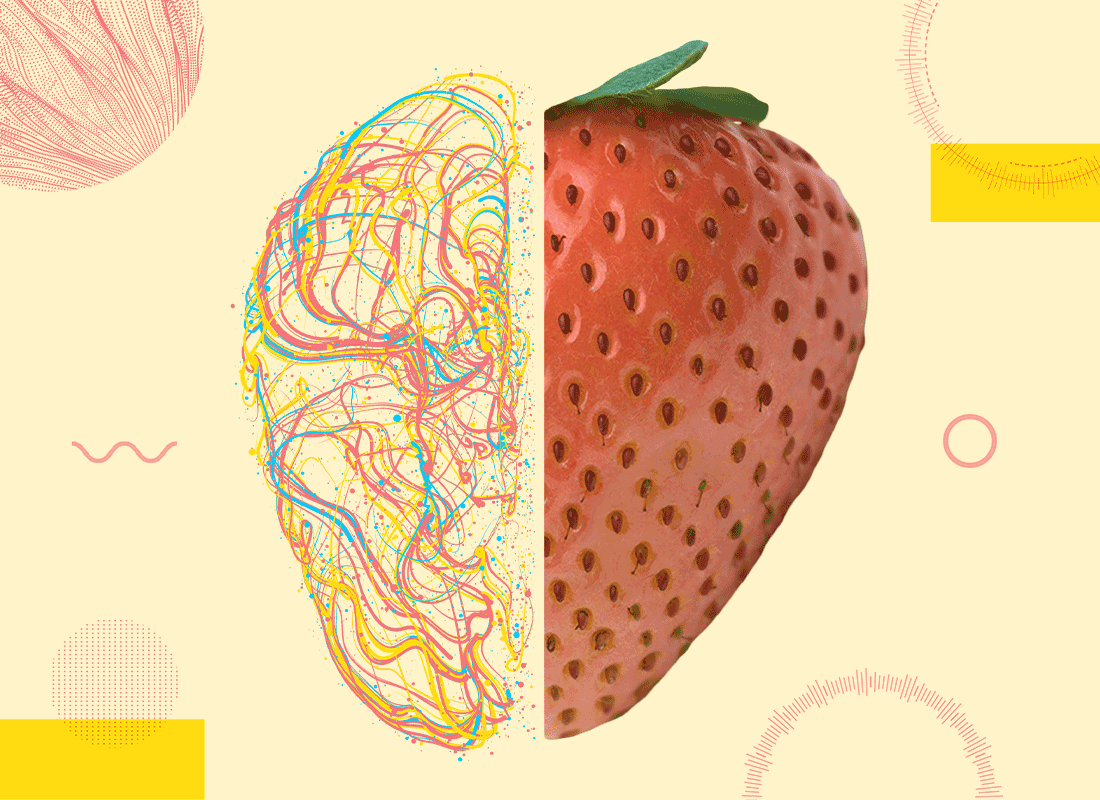 There is a deep allure in art and in science. Frequently depicted as opposing sides of the brain, each is often painted as a foil to the other.

Yet when a balance is found between the two, magic will be born. Or, in this case, blossom.

“The art of our business would not be possible without the science, and I find that very beautiful,” Frances Dillard tells me. “In fact, the art itself comes from science. Aspects of our art have a lot of data, analytics, and business assessments.” 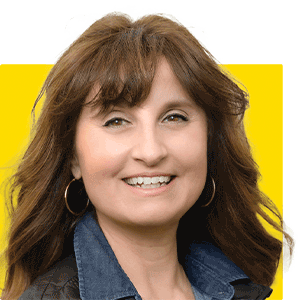 As Vice President of Brand and Product Marketing, Fran is the keeper of Driscoll’s right brain—the artistry of forming the company’s vision into its image. While some might think that means she is often at odds with the left, research-and-development (R&D) side of the brain, she is quick to tell me that science is, in fact, the most fascinating hemisphere of the brand.

“More than half of what I initially perceived as my job, to instill faith in our brand, was achieved by being backed by our science. I have always been so impressed with the power of our intellectual property (IP) and how it can set apart our product from the interchangeability fresh produce, I think, can fall victim to. So, my role has typically been to spark that magic, but at Driscoll’s, I have always felt that it was already poised to be struck,” she shares.

In fact, that magic proved more powerful than Fran and her team could have known as they set out to enchant the market with Driscoll’s latest proprietary high flavor varieties: Sweetest Batch™ and Rosé Berries™. 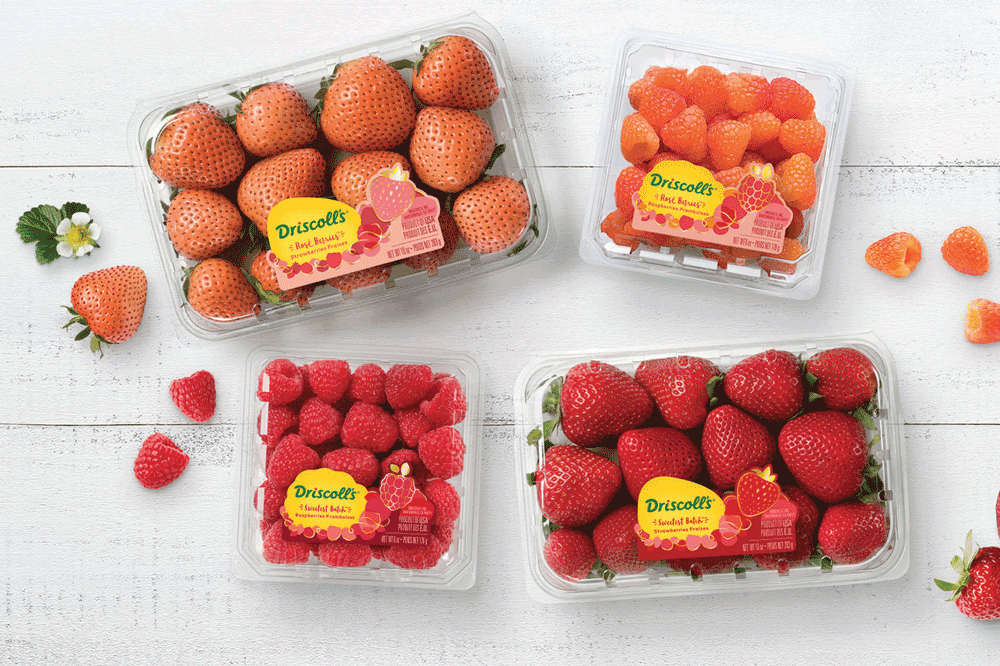 While it was fairly intuitive to market Sweetest Batch berries to a premium-berry-seeking crowd, the Rosé Berry had actually been in the confines of Driscoll’s R&D department for years, Fran tells me.

“Previously, we ran into issues with consumers perceiving a different berry color as not being ripe enough to eat,” Fran explains. “Millennials, though, didn’t have to be convinced. When we did our research, this group always wanted something new and didn’t care about preconceived notions and hurdles berries have seen with other generations. Instead, it was a perfect storm of open-ended demand and having something unique to offer consumers that happened to align with, of all things, the ‘rosé all day’ trend!”

There is a tale as old as the mind: someone makes a discovery too ahead of their time to be recognized during their life. Then, long after they are gone, the discovery is lifted to the prominence it deserves.

Thanks to the branding side of the business’ right brain, produce doesn’t have to suffer this tragic fate. 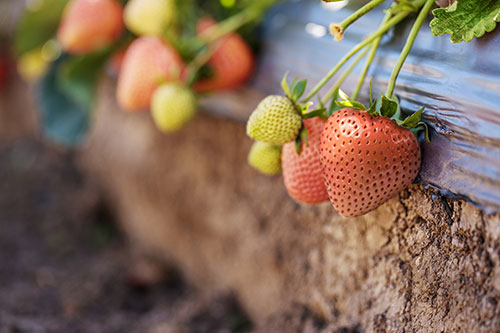 The proprietary varieties of Sweetest Batch and Rosé Berry were “discovered” and championed by Driscoll’s Joy Makers—an integrated team of breeders, sensory analysts, plant-health scientists, entomologists, and agronomists that collectively work together to uncover unique varieties that can disrupt the marketplace with exceptional flavors.

“There are several aspects of the Marketing Department, from Branding and Omnichannel to Product Marketing, led by Naomi Sakoda,” Fran details. “One of our responsibilities is to understand the needs of the consumer, today and in the future, and then translate those trends into meaningful business implications. Marketing works collaboratively with Global R&D and the Berry Flavor Center.”

Phil Stewart, officially known as Global Plant Breeding Director of Strawberries but better known as Driscoll’s strawberry guru, has been honing the flavor of the Rosé Berry for a number of years while Henry Yeung, a Sensory Analyst, captures the flavor insights.

“The art of our business would not be possible without the science, and I find that very beautiful.”

“The millennials brought us the ‘aha!’ moment signaling it was finally the right time to launch the Rosé Berry and how,” Fran concludes.

In June 2019, Driscoll’s introduced Sweetest Batch and Rosé Berry with a select group of retailers who, Fran explains, were enthusiastic about in-store and online cross-promotion with this new consumer segment.

“Our volume was limited during the launch, so dedicated retail programs were important to drive awareness and trial. By February 2020, the segment was expanded and Driscoll’s was one of the first companies to market a complete berry patch premium flavor offering of Sweetest Batch across strawberries, raspberries, blueberries, and blackberries,” she shares.

Since the debut, participating retailers in the program have driven excitement and awareness with dedicated branded destinations, utilizing clear merchandising and signage that promoted the high-flavor promise.

“The goal was to send a clear message to shoppers as to why they were paying a bit more for the berries versus the core product line,” she outlines. “The challenge and the opportunity was how to keep the excitement and sell-through going when COVID-19 hit during our peak summer of 2020. As things began to settle down post-lockdown in the U.S., retailers were once again back on track, welcoming shoppers back in-store with appropriate safety measures in place.”

While it might have seemed counterintuitive to offer a premium-priced product, Fran hypothesizes that people wanted new delights and reasons to smile, and food became a perfect opportunity for both.

“I think consumers wanted small treats for themselves. We’re talking about something that they can splurge on without being truly expensive, that they felt they deserved, and were willing to pay for the flavor. Likewise, retailers wanted these products in-store. So, it’s been really nice to see a traditional consumer packaged goods (CPG) premiumization strategy actually take off and be rewarded in sales. As a result, consumers found a good program and value,” she points out.

Another key component made clear over the past several months was ensuring that value translates not just in-store, but online as well.

“We’re seeing how consumers behave e-commerce-wise, so investing in a few programs that we normally would not have in the past, like Instacart, Shipt, and Ibotta, make more sense than ever,” Fran shares, confirming that this is a very new direction in Driscoll’s artistic flow. “We had to double down on such cyber investments to ensure consumers could order from home. Then we had to ensure they were looking for simple recipe solutions. Providing those, I think, was a way that we could make everything easier for customers.”

In short, it is a balance between brick-and-mortar and e-commerce, keeping in mind that the food sector continues to evolve.

“Our biggest challenge is ensuring that online retailers and retail partners treat produce as it deserves to be treated, presenting it with the same pride and cross-merchandising efforts we see in the store,” Fran observes. “We had some interesting discussions with Instacart on category management, giving the team some insight on the success produce has brought to physical stores. We pointed out that there’s a high-value consumer associated with the purchase of fresh produce and what that means to the shopper basket.” 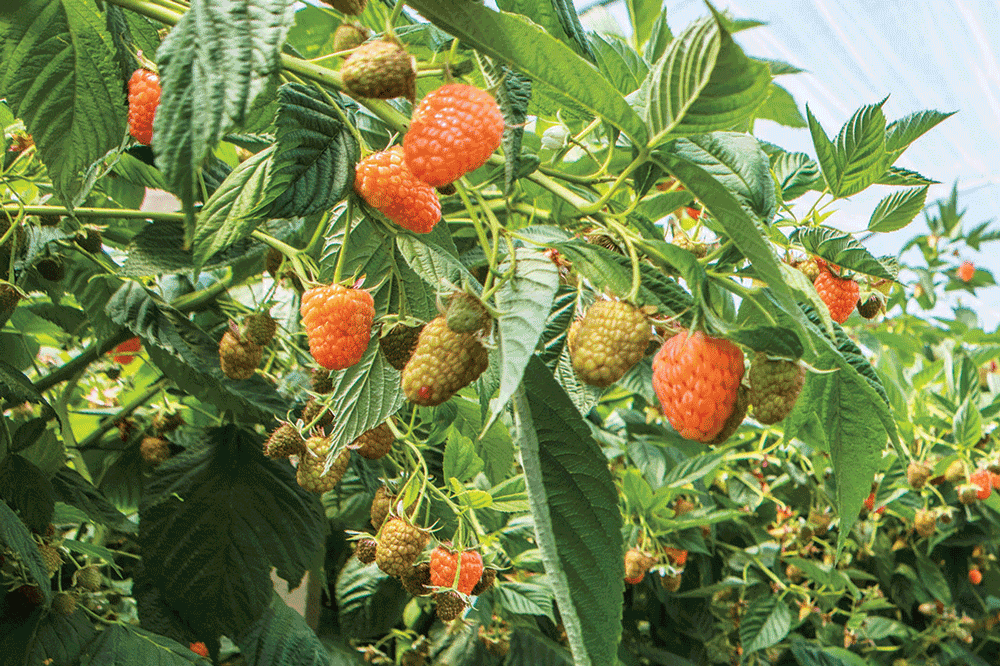 While I perceived a big risk in Driscoll’s continued commitment to a premium-priced strategy, Fran looks to the science-steeped left brain that has emboldened her entire berry journey.

“We were confident in seeing what berries have been able to do for the category over the last 10 years. We have been explosive in trying to meet the consumers’ needs, and berries have continually increased their value in produce. We really do say it is because of the flavor, which brings us back to the art and science of both product and marketing,” Fran says. “In the end, people are going to buy what tastes good. We feel fortunate to have seen an explosive rise in berries based on people enjoying the flavor they like with the health halo as a bonus.”

The science of flavor is the core reason to believe Driscoll’s has a differentiated, branded offering, Fran says, adding how it certainly makes her job that much easier. Yet I can only imagine what it has been like for her to learn how to bring a new kind of life to an entirely different world from where she began.

“I’m here to understand what’s happening in the marketplace, to bring my understanding back home, and to readjust our strategy by allowing the magic of the science to take off with what I gave it. And it really is magic.”

Fran made the jump to Driscoll’s with an already shining portfolio of consumer brands, including LeapFrog Enterprises, Mattel, and Disney—perhaps the largest embodiment of making an algorithm of art. But she is quick to tell me they are different points on the same brain board, and her influence can be seen not only in Driscoll’s conscious shift from a commodity-majority perspective to one of inspiring brand loyalty but in setting the stage for a launch.

Introducing Rosé Berry, in particular, Fran says, was an artistic understanding of macro consumer trends combined with sharing a clear story. To achieve this, Fran and her team launched a “free” earned media campaign.

“This was such a huge success,” Fran smiles. “Everyone’s top publication covered the ‘new news,’ from Good Morning America to Late Night with Seth Meyers. Based on product samples sent for tasting, we were featured in over 13 high-profile publications and even won a few PR awards. As a result, the marketplace rewarded flavor-forward innovation.” 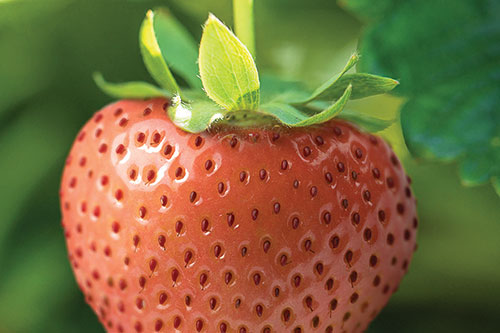 The strategy may be complex, but her reasoning is simple.

“People buy from the heart—thus, brands and brand loyalty matter,” she points out. “Our marketing strategy is consistent throughout: Put the consumer’s needs first and understand how we can uniquely meet their needs for brand differentiation. As such, we wanted to own the highest promise of berry flavor, giving way to the new segment of Sweetest Batch and Rosé Berries.”

When I ask about Driscoll’s commitment to helping retailers disrupt the marketplace, Fran points not to such layered plans but to the products themselves.

“The Sweetest Batch and Rosé Berries are our commitment, and that cannot be met to the fullest without a meeting of the minds between the science and the art of what we do. Certainly, this is a business, and you have to make money. But, in the end, if you’re only focused on yield, you’re not going to sell the next clamshell,” Fran says firmly, quoting Chairman and Chief Executive Officer J. Miles Reiter. “‘The purpose of the first clamshell is to sell the second clamshell.’ If you prioritize yield over flavor, you’re not going to last. That has been the North Star and the singular focus of our mission at Driscoll’s. And I think that’s why we’ve been so successful.” 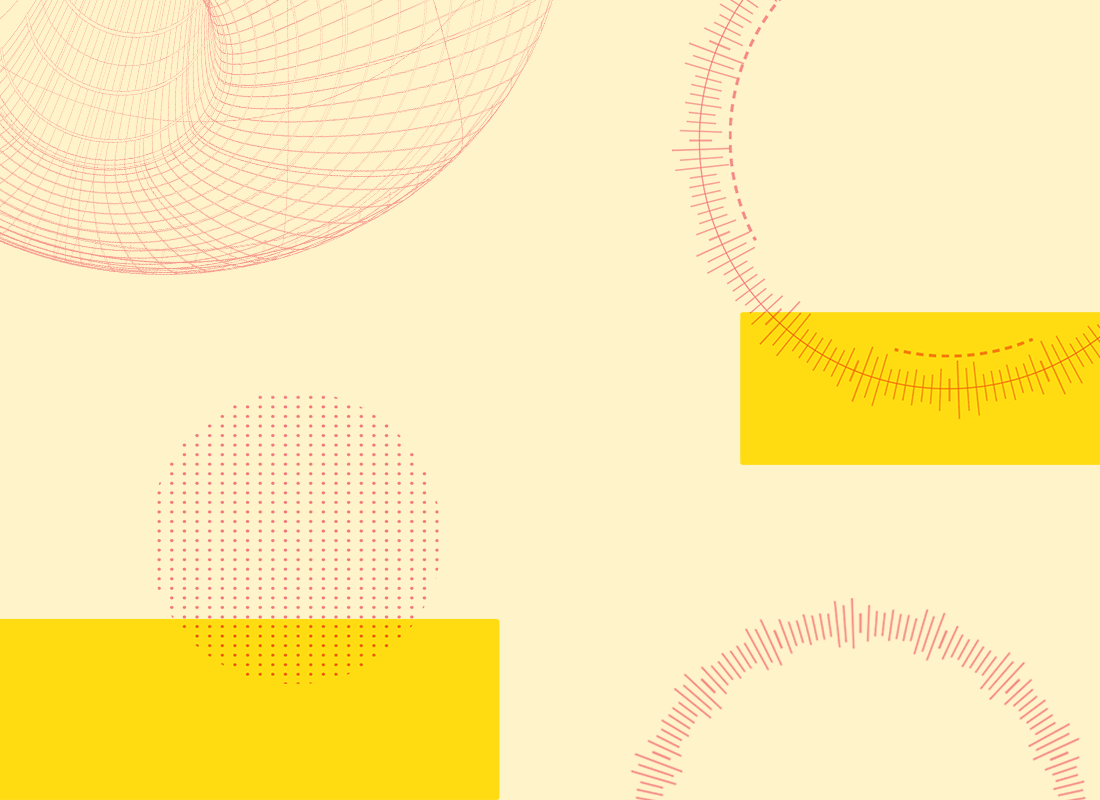 Thus balance between both sides of the mind driving Driscoll’s is necessary to the realization of its vision.

“Marketing budgets are really tight in the produce industry, so I am reminded that our R&D investment in the science of flavor is a critical part of the brand’s growth and development. The R&D investment is what allows us to bring to market what matters to our customers and consumers,” she shares.

If not for that dedication, there would not have been the discovery of the berries that, today, are signatures of the brand. But science alone could not have helped them ascend—for that they needed the vision of the right brain.

“I’m here to understand what’s happening in the marketplace, to bring my understanding back home, and to readjust our strategy by allowing the magic of the science to take off with what I gave it. And it really is magic,” Fran says with a smile.

For behind this bright-eyed artist is a team of mad scientists and, together, they form one beautiful, berryful mind.

THEIR WEBSITE
Family owned for over 100 years, Driscoll's is passionate about growing premium fresh berries. Our strawberries, raspberries, blackberries, blueberries and organic berries are sweet, juicy and naturally wholesome.