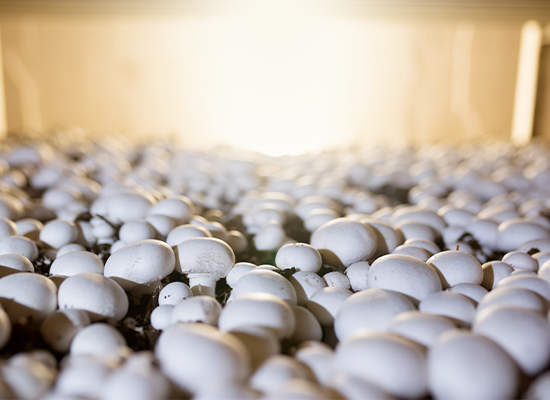 A cherry red baton sits primed in the bright afternoon sun, its hollow center whistling in the wind as it anticipates the hands of the first runner. The relay race plays out before me, each stride seeming longer than the next and with power building in every footstep.

I did not expect to find myself at a metaphorical track meet when I sat down to interview long-standing leaders from Highline Mushrooms, but the thrill is far beyond any expectations. The baton lands in the hands of Jane Rhyno, Vice President of Sales and Marketing, who has been crossing finish lines at the company for over 11 years. 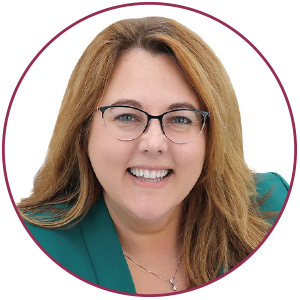 “As cliché as it may be, my favorite part of this job is the relationships I’ve formed and the dynamic nature of the business. My current role is in sales and marketing, but really, my focus is on building a team,” she tells me, setting the stage for her fellow relay racers. “Of course, we’re focused on what our customers need and what the consumer wants. But, for me personally, it’s about focusing on the team and how we can make their jobs enjoyable and help them feel successful in their roles.”

Jane’s shoes first hit the produce track when she was 16 years old. Her father and grandfather each came from the industry, so when she got her high school job at a grocery store, the seeds had already been planted. Eventually, she worked her way up to Produce Buyer at a large retailer, which is where she became familiar with Highline Mushrooms.

“As cliché as it may be, my favorite part of this job is the relationships I’ve formed and the dynamic nature of the business. My current role is in sales and marketing, but really, my focus is on building a team.”

“I got to know the company and felt our values were very well aligned,” Jane explains. “When I moved on to another position at another company, I kept in touch with the leader at Highline, and when an employment opportunity came up, I jumped at it.”

The experience gained from her nearly 15 years on the buy-side is evident to me, bringing to her role a unique lens to look through as she navigates the supply chain.

“When you’ve been a customer and had the experience of being a buyer, you have a better understanding of the customer and the difficulties and challenges faced at retail. They’re not just thinking about mushrooms all the time; they have to think about their ads and the stores. Being aware of the many demands they meet and trying to help make their job easier has certainly given me a good perspective,” Jane tells me. “Additionally, I have had the opportunity to see the end consumer’s actions and reactions at retail.” 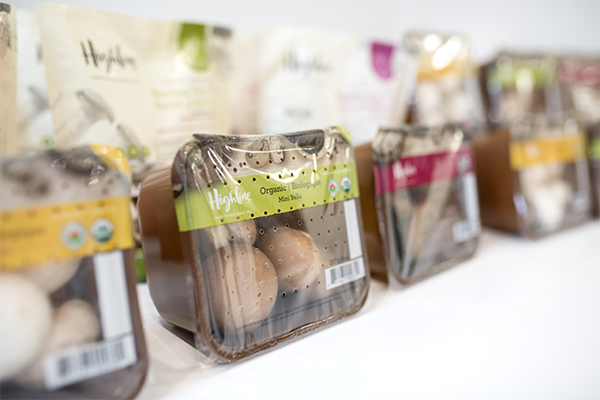 In everything she does, Jane is looking to support Highline’s buy-side customers. Remember the team she so fiercely supports? They are building a sales and marketing program that is one of a kind for Highline—something I am sure the grower’s customers consider a key selling point.

“With our sales team, honest communication with customers is the key foundation. Our ultimate goal is to protect and grow our businesses, and being upfront about opportunities and obstacles is critical for our relationship with them. We provide ideas and business recommendations to our customers that not only benefit us, but benefit them as well,” Jane adds.

Interviewing three different Highline members, I notice a running theme. Challenges are not only par for the course, but they are welcomed and ambitiously addressed. Such is the message from 25-year company vet Hinre Yako, Growing Operations Manager – Head Filling. 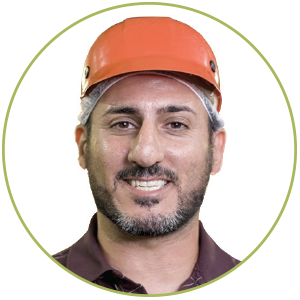 “Challenge is something I look forward to,” Hinre says of his move from Grower Assistant to his previous role as Head Grower at the Leamington, Ontario, Canada, headquarters. He started at Highline in 1997 as Runner before moving up to Junior Grower after just nine months. “Becoming Head Grower was the next step in challenging myself to be better. By accepting greater responsibility in each role and taking charge of an entire crew, I was able to grow even though I went outside my comfort zone.”

Moving from the field to the corporate office was a challenge in and of itself, widening Hinre’s scope from one single growing operation to Highline’s entire farm network as a whole.

“You always have the opportunity to take a step up, and this opportunity is open to everybody. It’s up to each individual to decide whether to take that challenge or not.”

“Most of the time, my concentration is 50/50 between the Leamington and Kingsville, Ontario, farms. Based on where the need is greatest, I will ensure equipment is functioning properly and that we maintain quality of the fill and quality of the compost daily,” Hinre says. “A lot of good ideas can come from one farm and be useful to the other. Most of the farms utilize different machinery, are housed in different buildings, and are run by different operators, meaning each can learn from the rest.”

I imagine Hinre wearing a different hat—or jersey—with each operation he focuses on, chasing a different challenge each day with the foresight that the baton should be passed as many times
as possible.

“Highline’s second top value is ‘challenge,’” Hinre says, echoing the beginning of our conversation and explaining it falls just after the first value: family. “You always have the opportunity to take a step up, and this opportunity is open to everybody. It’s up to each individual to decide whether to take that challenge or not.”

Having been with the company for over two decades, Hinre has experienced many challenges, even outside of his own roles. He experienced the company’s rapid growth across Canada, making him an integral member of this team.

“I started with Highline when the company only consisted of our old farm in Leamington and our Wellington, Ontario, facility. It was a really big experience for me to be part of Highline during that expansion when we bought the Kingsville facility 10 years later. From there, we pursued further expansion into Western Canada and bought more facilities,” Hinre adds. “By starting out small and going bigger, I continued to build more experience, more knowledge, and, ultimately, was happier.”

In our final leg of the race, the baton is tipped to Will Peters, Corporate Technical Growing Specialist, whose path at Highline began very similarly to Hinre’s. 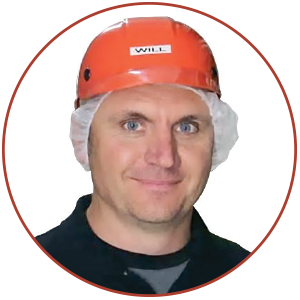 “I started in an entry-level position back in 1995 as Runner. After one year, I joined the cultivation crew on the East farm, and I’ve worked in every department since then with the exception of packaging and sales,” Will details. “After a few years on the cultivation crew, I became a Supervisor. I then became a Growing Manager before moving up to Farm Manager. I was a Farm Manager for a few years, and then with Highline expanding, there came the need for a Corporate Grower, and they offered it to me.”

Will is now responsible for the growing side of things on all of Highline’s farms. Part of his job is also to educate the young growing team and perform audits on the farm. He notes that no two days are the same, and the constant change our industry presents keeps his day-to-day interesting.

“At Highline, we’re always experimenting and trying new things, and I think that’s how we became one of the most successful mushroom farms in the world.”

To little surprise, challenges are what truly light the fire in his belly.

“Fair, challenging, and innovative,” Will answers when asked the three words that best describe Highline. “At Highline, we’re always experimenting and trying new things, and I think that’s how we became one of the most successful mushroom farms in the world.”

Because no two crops are the same, Will states there is no monotony or boredom when it comes to growing mushrooms. The obstacles presented by each new day are simply fresh chances to hone his craft and deepen his expertise. 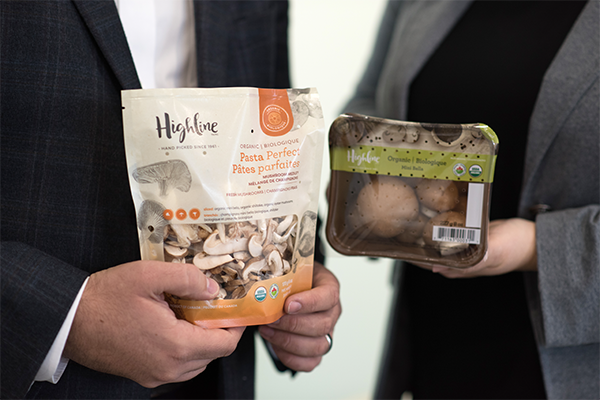 The 25-year company leader also took on challenges from a personal standpoint, as he actually left for a year to pursue new ventures, but soon found himself back in the Highline home.

“I came to the area for a wedding, and Harry Enns, the former Chief Financial Officer, hunted me down and convinced me to come back. Everything clicked into place, and I have no regrets,” Will smiles. The happenstance is a shining example of how Highline attracts and maintains such a high level of talent. “Highline truly does pride itself on promoting within, and there’s a lot of experience on our staff. If you’re willing to work hard, you’re going to move up the ladder. Senior management does a really good job of recognizing people that are willing to put forth the extra effort and learn, and those are the people that move up the ladder fairly quickly.”

I believe a relay team is only as good as its runners. Those who make up the team and uphold their leg of the race are those with the most time clocked at the meets. Jane, Hinre, and Will are track stars in my eyes, each bringing a tenacious spirit to the field and all chasing a common concept: challenge. 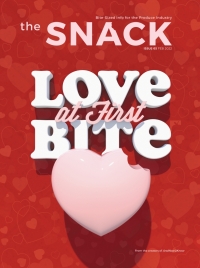