I'd like to ask you a favor when you start this story—one that may be a bit more difficult if you’ve gotten used to your virtual workspace. Take a minute and imagine what a traditional office is like.

Can you hear the distinctive din of a mouse scrolling across the page, the faint tick of a clock in the background, or the humming of the overhead lights that cut through the silence? Do your fingers feel the satisfying click of your favorite pen or the clack of the keyboard as you type an email?

If I let my mind drift, I can almost smell the warm pages fresh out of the printer just as the ink begins to settle—a familiar scent to those who’ve ever manned a copier. 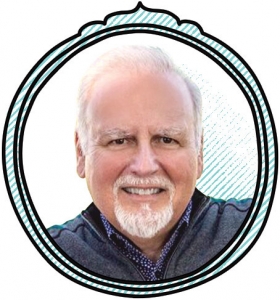 Now, erase all of that, take a step back, and imagine if those sounds were cloaked with laughter as your coworkers took turns riding a slide from the second story of the building instead of using the stairs. The scent of printer ink becomes faint under the aroma of fresh tree bark that permeates the building. Instead of the foamboard tiles of the roof, there were clouds and blue skies. And rather than taking your meetings in a boardroom with identical chairs encircling a Formica® table, you were perched in a treehouse watching the world pass outside the windows as you sat above the rest of the Earth.

While these may seem like things imagined in a childhood dream, for Wish Farms, it is a reality.

"...we worked pretty tirelessly over the last handful of years to grow into all four berry commodities, year-round. And I hope that the building and the warehouse are the stamp showing that we’ve arrived."

As the grower approaches its 100th anniversary next year, Wish Farms was faced with a pivotal milestone and the opportunity to prove that a century old is more like 100 years young if you are of the Wishnatzki clan. With that mindset, the brood set out to further weave itself into the fabric of the fresh produce industry, staying at the forefront of buyers’ and consumers’ consciousness with the unveiling of its unparalleled new headquarters. 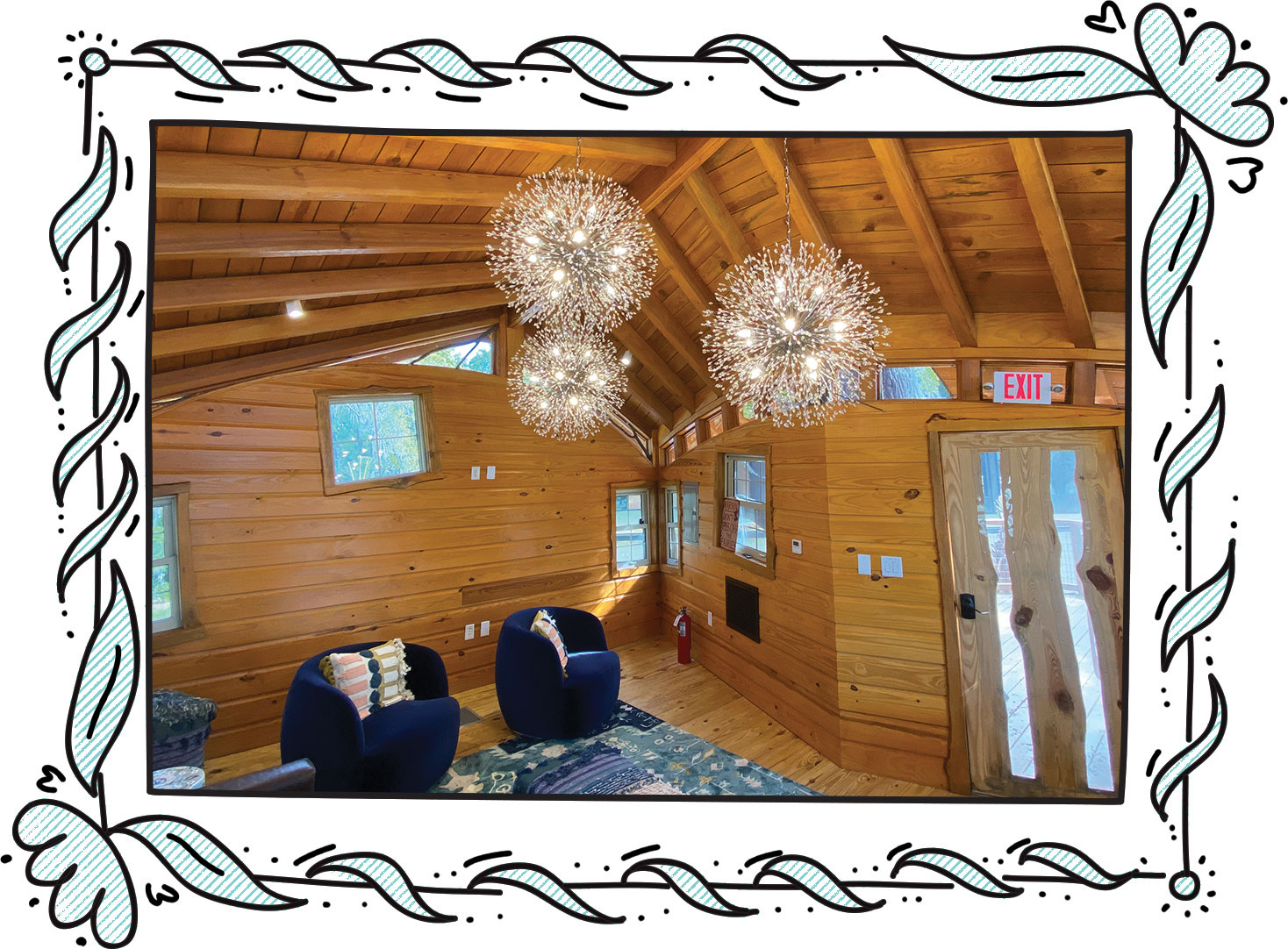 What all started as a desire to create a new office space turned into a workplace wonderland where Wish Farms’ associates come to not only take on their daily duties but enjoy themselves while doing them.

The original need for this new Plant City, Florida, headquarters stemmed from Wish Farms’ rapidly evolving team that was running out of area as the company continued to grow over the years.

“Well, we were out of space. There were almost people in closets, and they were taking up conference rooms. It was people on top of people. So, we needed this four years ago,” Gary Wishnatzki, third-generation Owner, tells me with a slight laugh in his voice as he reminisces on the company’s old digs.

Wish’s search for the perfect location started back in 2015, and the task of finding the ideal spot was not one that was taken lightly. From the start, this project was a labor of love and of legacy. Meeting all of the right criteria was essential before Gary and the team at Wish Farms decided to plant their roots, the most important being the locale.

“Number one, overall, our team wanted to have good proximity to our Plant City growers,” Gary explains, emphasizing the importance of remaining connected to all aspects of Wish’s business and its partners. “We wanted to stay inside city limits, so we’d have a Plant City address. This is where my grandfather came in the 1920s, and we’ve been here ever since.”

Eventually, they did find a Plant City location. And let me tell you, folks, it is something to behold! Far from the closets and conference rooms where Wish’s employees were making magic happen just years before, they are now inhabiting a magic space all their own. The office has been transformed into what Nick Wishnatzki, Public Relations Manager and Gary’s son, so lovingly describes as a pixie forest, playing off of the company’s signature pixie character, Misty, that adorns its packaging. 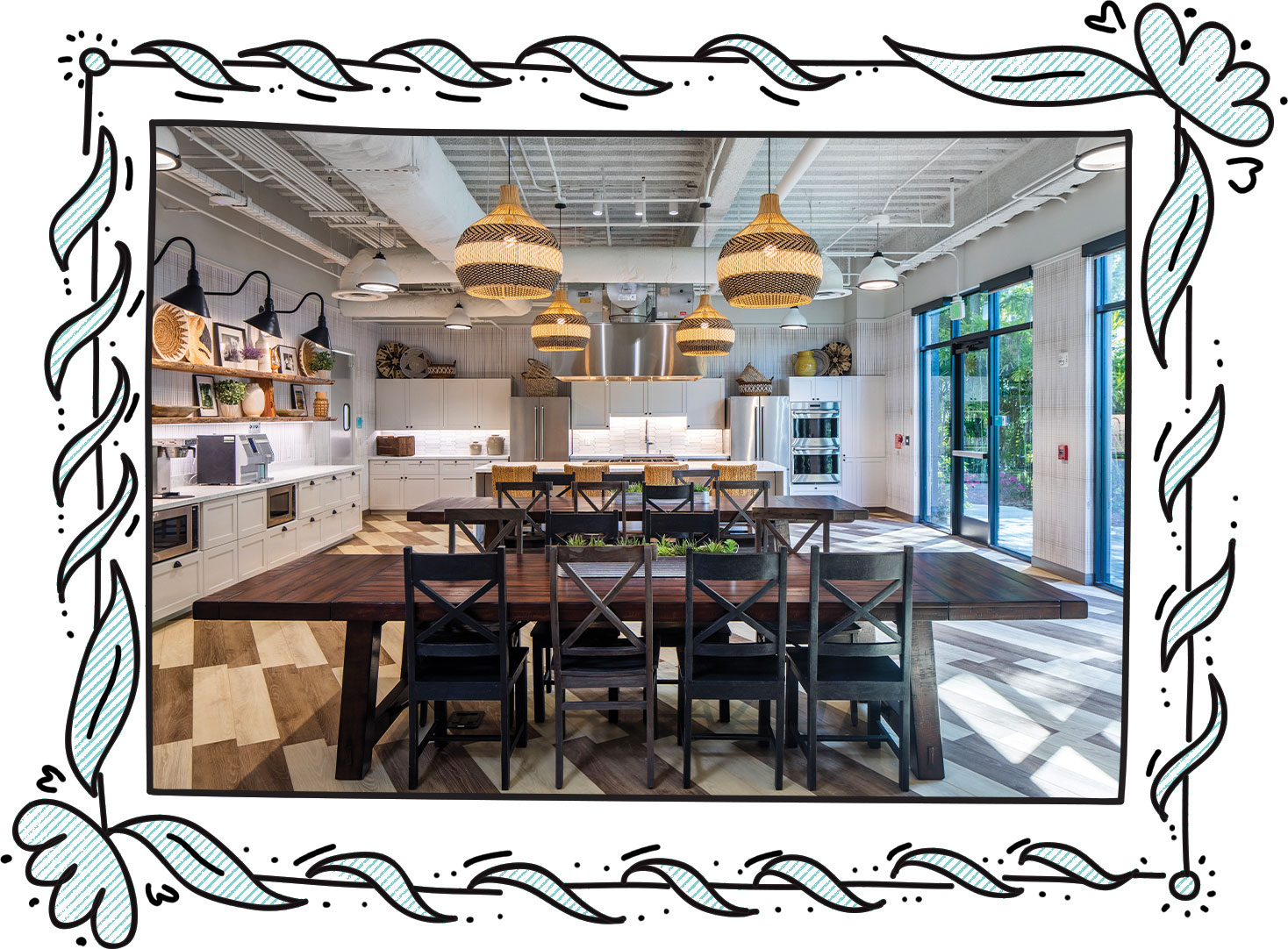 “The foundation of the project was the brand, and we wanted the building to reflect the brand,” says Nick. “The pixie forest was the dream child, and it just grew from there. It is a fun, exciting place. And we also want it to be a recruitment and retention tool for employees.”

Once I hear Nick evoke the imagery of a pixie forest to delineate the elements of Wish’s headquarters, everything around them takes on an enchanted air. I can’t help but see the dedication to the brand in every aspect of the building, down to the smallest details like the reclaimed wood conference table where everyone is seated. For every tree that was cut down during the build, a new one was planted, and the remnants were put to good use as tables throughout the office, the stairs, and the massive slide that greets guests as they enter the front doors. You read correctly: I said a slide. 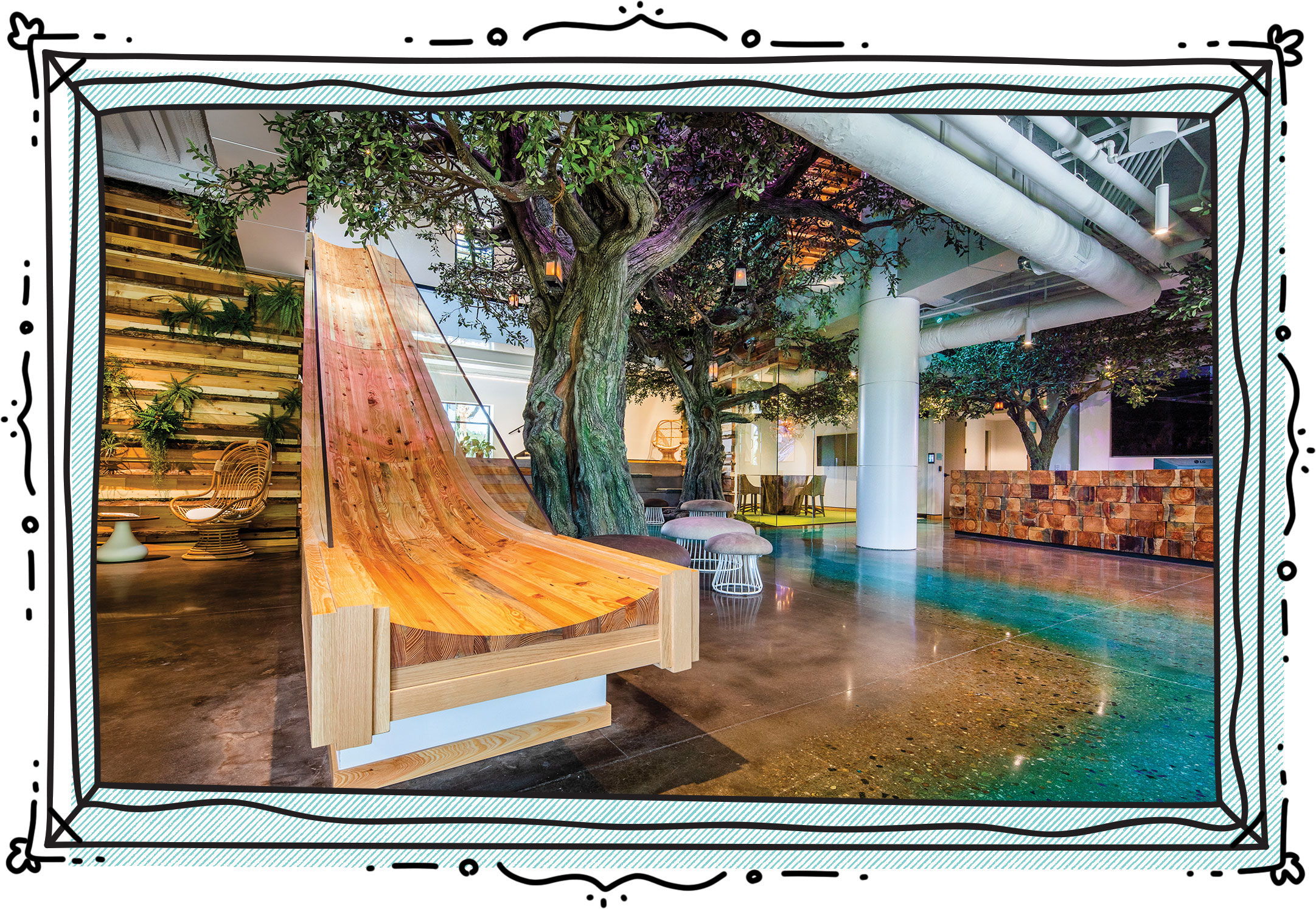 It is at this point in my interview with Gary; Nick; Elizabeth Peterson, Gary’s daughter; and James Peterson, Vice President of Sales and Marketing and Gary’s son-in-law, where we all get a little giddy—like five kids recounting a spellbinding fairytale.

“From the get-go, you always said this building is going to have a slide. That was non-negotiable. You were going to make that work,” Elizabeth says to her dad.

“Then I said, ‘If we have a slide, we need a treehouse!’” Gary retorts.

It is at this moment that I see the Wishnatzki bond and the fatherly side of Gary shine through. I can’t help but think of my own dad, always wanting to give his kids—and for Gary, this includes his employees—the most special experience possible.

Gary and the Wish Farms team didn’t stop there though—they went above and beyond, creating a cross between a pixie forest and the innovative tech campuses of California’s Silicon Valley, but as Gary reminds me, none of the offices in Silicon Valley have a treehouse (sorry, Google, but Wish may have one-upped you).

"We’ve always talked about the cycles of business and how you have to reinvent yourself. Businesses constantly have to grow, especially a generational business."

From the noise-reducing ceilings painted to look like clouds and a state-of-the-art fitness center to a walking track encircling a lake and a café with a full-time chef making lunches for employees in the works—this space has it all.

While it may all seem like a fun project to create a fresh office space, the completed headquarters serves a deeper purpose for those at the company.

“From where I sit, this space just solidifies what we’ve built over the last handful of years. I think when people see the office and the warehouse, it puts us on the map,” comments James. “We’re most known as being a Florida strawberry shipper, but we worked pretty tirelessly over the last handful of years to grow into all four berry commodities, year-round. And I hope that the building and the warehouse are the stamp showing that we’ve arrived.” 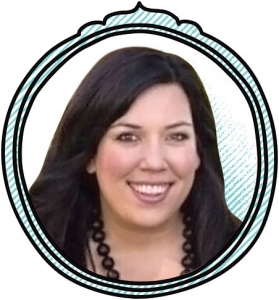 Extending the company’s reach into the retail market as well, the new headquarters, in addition to the recently built warehouse, will further enable Wish Farms to form deeper connections with its buyer partners.

“I think this has given us the ability to centralize, specifically regarding our quality assurance and our whole quality control team,” explains James. “All of our blueberry packing and strawberry processing is under one roof at our warehouse, so it’s really allowed us to unify and improve on our quality, which is a vital part of growing with all of our retailers.”

"You need to have something that sparks, and I’ll be quite honest, all the sparks that we’ve had over the years, they weren’t intentional, but they just happened. We’ve been lucky in that respect."

The need for strong buy-side relationships will stay a prevalent part of the company’s future growth as Wish Farms remains a company in constant motion. As a trade writer, I want to share the exciting details of the brand’s upcoming plans, but I have been sworn to secrecy. (And we all know that promises made in a treehouse are binding.) However, let’s just say that innovation will be at the forefront of whatever comes next from Wish Farms.

“Moving forward, we’re going to be looking for innovative ways to engage our employees, asking them, ‘What ideas do you have?’ No idea is too crazy. Let’s consider it, put it on the table, and see what forward-thinking idea or product we might have,” Nick tells me concerning Wish’s new Innovation Center, where it is developing the latest products and where these ideas will live. 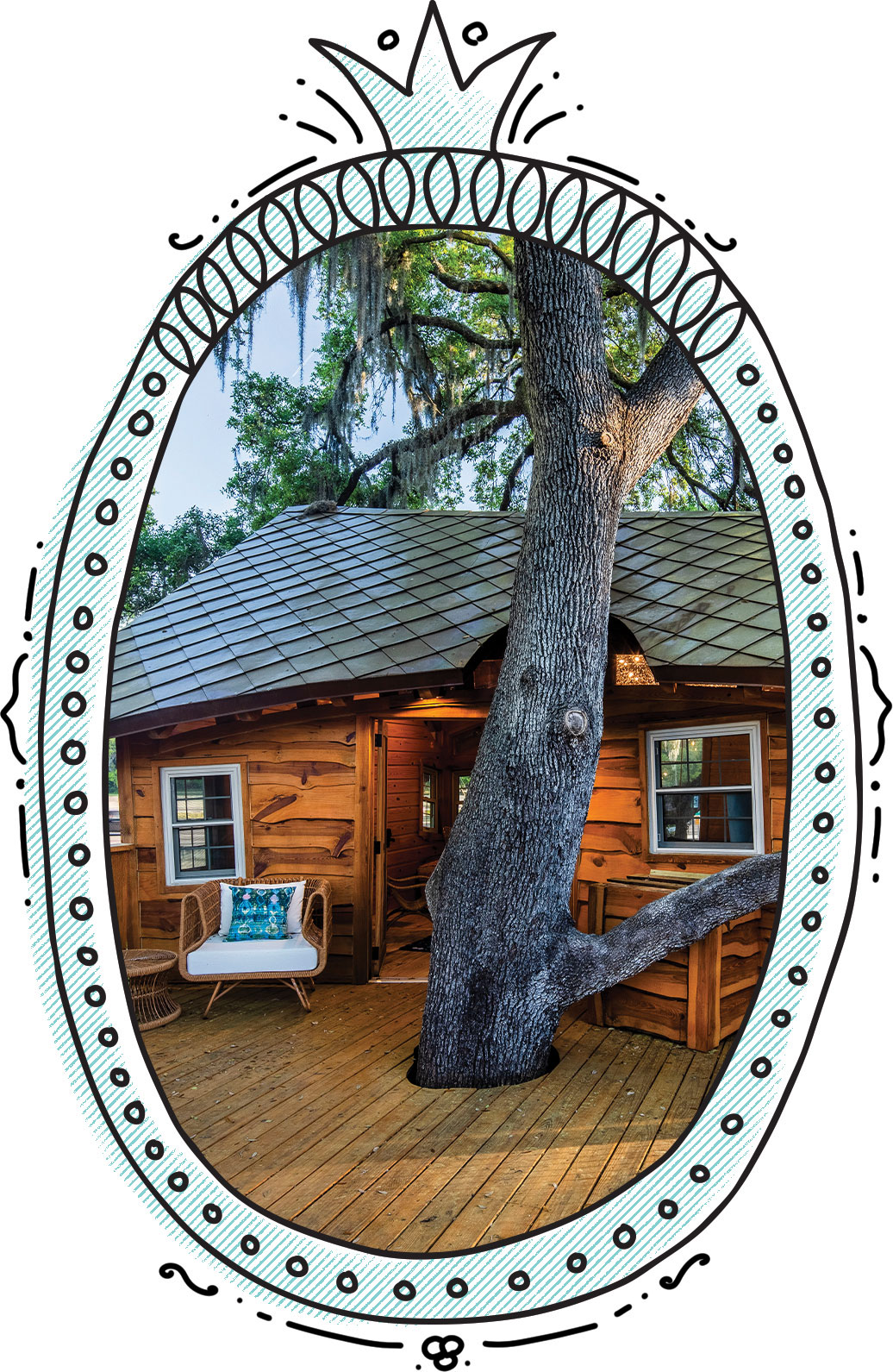 Nick’s comment that “no idea is too crazy” spurs a little bit of laughter across the room as he and James turn to look at Gary, a leader that has been known to push the boundaries beyond what was thought possible. And, as this will help Wish continue to grow its portfolio and its footprint, it has also established a legacy for Gary that will remain an integral part of the Wish Farms history.

“We’ve always talked about the cycles of business and how you have to reinvent yourself,” Nick says to me and Gary at the same time. “Businesses constantly have to grow, especially a generational business. You can get stuck in a rut and continuously do the same thing. But I feel like, when you got on the fresh produce scene in the seventies, Dad, you kind of pushed the envelope.”

Gary then goes on to elaborate on Nick’s sentiment.

“You need to have something that sparks, and I’ll be quite honest, all the sparks that we’ve had over the years, they weren’t intentional, but they just happened. We’ve been lucky in that respect,” he explains, bringing the pixie-like imagery synonymous with the brand to the conversation, as sparks resemble fireflies zipping through the air.

With the fire lit and blazing for the next generation of Wish Farms leaders, Gary hopes it will include his lineage continuing the family legacy.

“I would love to see the next generation coming into the business, my grandkids, and their kids beyond them, but I know this business isn’t for everybody,” he finishes.

And then, as if the Universe seemingly mustered all of its poetic abilities to deliver me my own spark and the perfect ending to this story, through the glass window of the new conference room I see a small figure toddling its way down the hall toward the door. Down the corridor comes one of Gary’s grandchildren, part of the next generation of Wish that had been threaded throughout our entire conversation.

As he beckons his parents from the room, I can’t help but wonder if one day he will be sitting at this exact table made from the trees that stood decades before his birth and embrace a legacy that came into being more than a century earlier.

Everything comes full circle before my eyes as if a pixie materialized from the very trees, granting me this magic moment.

THEIR WEBSITE
Wish Farms has grown from the humble beginnings of an immigrant pushcart peddler to Florida's largest strawberry shipper. This is a true American story. Currently, Wish Farms is in expansion mode. We are actively seeking out growers who align with our core values of Quality, Integrity, and Responsiveness.