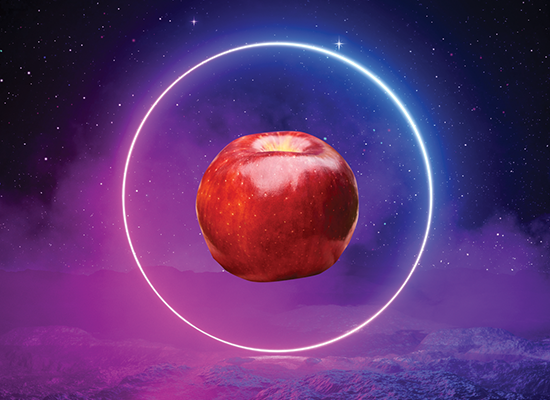 From a young age, I was taught to reach for the stars. Ever since, the cosmos has been a fitting ruler with which to assess my life. Lofty goals, then, do not scare me, nor do industry innovators that upset the balance of produce synergy. Why, Pythagoras himself looked at the star-riddled blanket above us and saw order, nobility, wonder.

Millennia later, the swirling gases and the organized brilliance of chaos would distill a new apple that some have fittingly called out of this world. Cosmic Crisp®, a result of 20 years of scientific pursuit and industry ingenuity, has taken hold of consumer consciousness in unforeseen ways. Kathryn Grandy, Director of Marketing for Proprietary Variety Management (PVM) and Manager of the cultivar’s consumer launch, shared the story with me one afternoon, dotting each revelation with comet-jets of light. 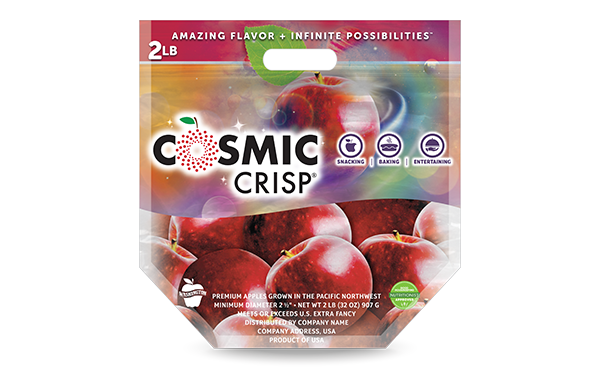 “Cosmic Crisp is a dream apple created from the collective and inspired thinking of many people,” she began, sparks of starlight already apparent in her voice. “Bruce Barritt, Horticulturist and Developer of the Cosmic Crisp, set out on a mission to fill a produce void for a firm, crisp, and juicy apple. After decades of cross-pollinating, tasting, and testing, along with research and development at Washington State University’s (WSU) world-class treefruit breeding program, the Cosmic Crisp apple was discovered. WSU researchers, including pome fruit breeder Kate Evans, developed a new cultivar that would change the face of the industry and win enthusiasm among consumers with a combination of taste, texture, and usability.”

At its core, PVM is all about bringing new fruits into the market so that consumers will continue to be delighted by fresh options. It’s easy to think of each new discovery as a planetary revelation or spotting a new comet: the space between each sighting makes it all the more precious.

“Cosmic Crisp® is a dream apple created from the collective and inspired thinking of many people.”

As you might have guessed, dynamism and genius are required in this type of work, especially when tackling a mammoth investment like Cosmic Crisp.

“This apple demonstrates how the science of breeding and the art of imagination can work together to create an utterly new and delightful apple,” Kathyrn noted.

Creating something imbued with stardust is no simple feat. In 1997, Bruce began efforts which later became WA 38, or Cosmic Crisp. After WSU selected this apple to commercialize, PVM was awarded the commercialization contract in 2013. Since then, the development of the WA 38 has been carefully studied and researched. Over 20 years of the best-growing, harvesting, and storage practices have been packed into one apple! This assures Washington State growers the ability to understand the cultivar and deliver the best fruit possible.

When it came time for Cosmic Crisp’s launch into consumer consciousness, both PVM and Washington State understood the importance of creating awareness around the brand and bringing it to life for retailers and consumers alike. Backed by a $10 million-plus marketing budget over a five-year time frame, the theme for the launch—Imagine the Possibilities™—awoke a sense of wonder, that reach-for-the-stars mentality that infuses our lives with purpose and meaning. 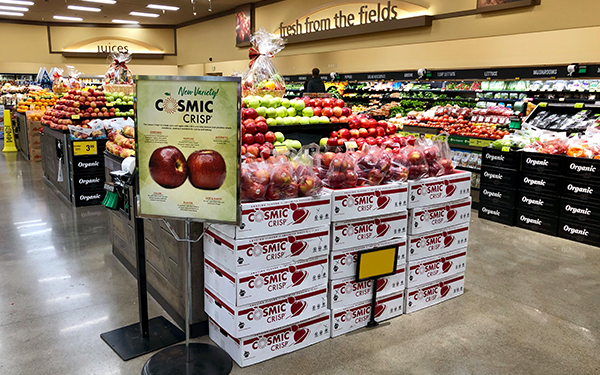 The first of these partners came in the form of Missoula Children’s Theatre and uniphi’s Space Agency.

“Our goal has always been to inspire and educate people of all ages by using Cosmic Crisp as a perfect example of big dreams becoming a reality,” Kathryn expressed, and I’m once again stunned by her dedication to what this apple represents. “For example, by sponsoring the Missoula Children’s Theatre, we connect with thousands of families across the country in schools and online. Our partnership with uniphi’s Space Agency has brought us into the space exploration community. We’ve yet to meet an astronaut who doesn’t love apples!”

This, I think, is one reason why I love this world of fresh produce. It invites what we might consider unlikely partners into the fold, bridging the gaps between celestial exploration and boots-on-the-ground connection. 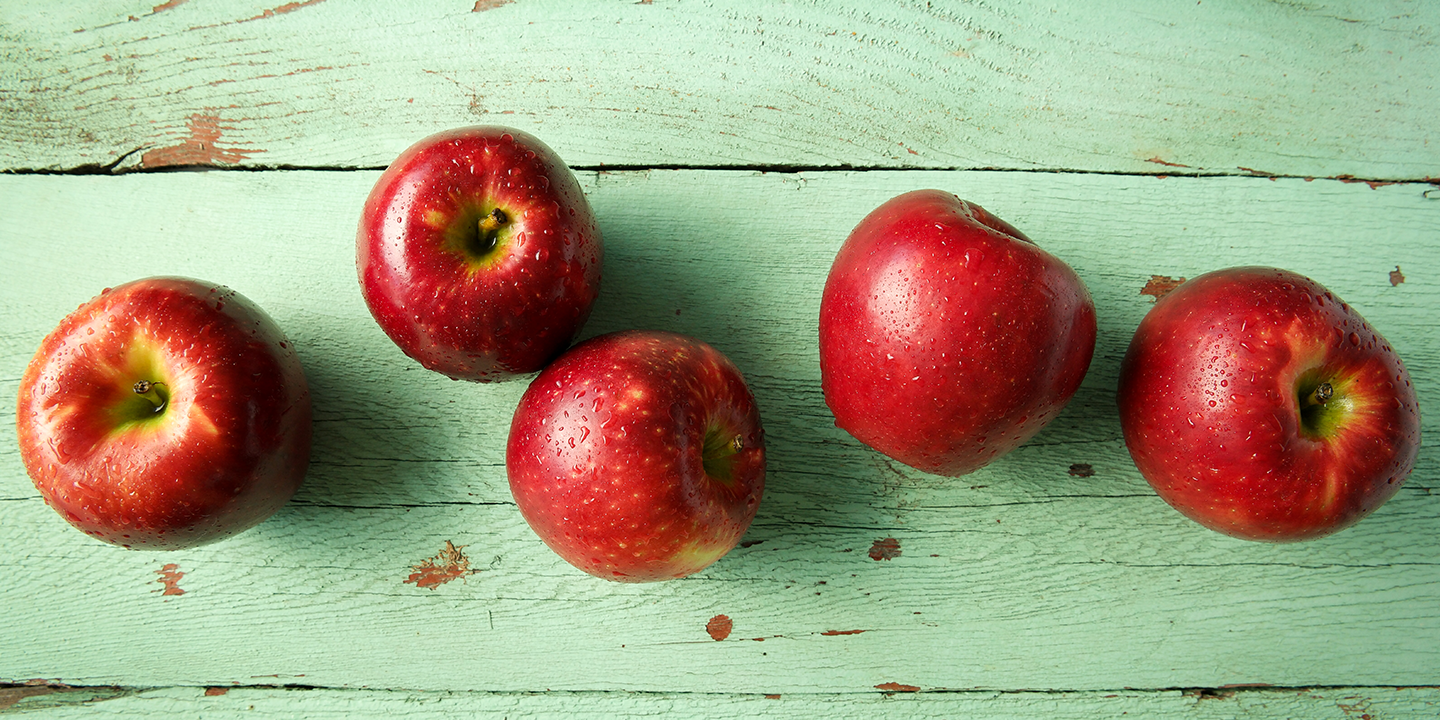 “From a brand standpoint, it’s always been important to directly support science, technology, engineering, and mathematics (STEM) organizations that empower people to achieve their dreams. We’ve developed partnerships with a select and diverse set of ambassadors that bring unique perspectives to give us new ways to engage consumers. Major media partnerships have helped us literally get into the hands of millions,” Kathryn shared.

Its Brand Ambassadors, all of whom generated mass excitement around the brand, embody the core pillars of Cosmic Crisp itself: EAT, encompassing the taste, texture, and other key attributes; PLAY, encouraging the exploration of food; COOK, using recipes, baking, or coming up with unique applications; and INSPIRE, supporting STEM, dreams, and aspirations.

Each element within Cosmic Crisp’s launch has skyrocketed it to success. Even the very appearance of the apple is speckled with brilliance; the starburst-like lenticels create an illusory experience of the cosmos itself. 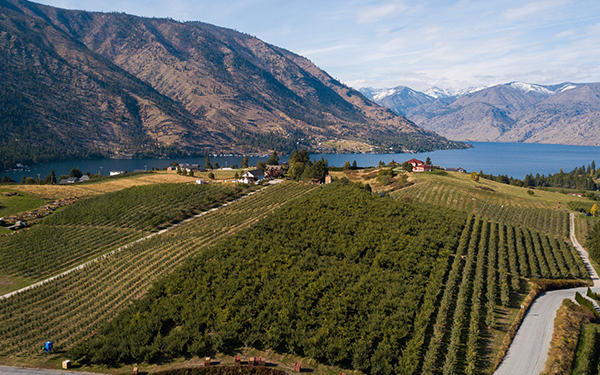 Naturally, an apple of such innate distinction has piqued the interest of buyers the world over—and for good reason.

“We highly value our growers and retailers as partners in the effort to build the Cosmic Crisp brand. Working together to use campaign elements in a brand-focused way helped make the in-store execution of our first season a success,” Kathryn noted before dialing into another partnership that enhances the brand’s standing with the buy-side: receiving the Good Housekeeping Nutritionist Approved Emblem.

“Retailers and consumers alike recognize and trust the Good Housekeeping Emblems. These emblems were established over 100 years ago and have continued through generations of consumers to maintain one of the most recognized and trusted positions in America,” she explained. “Good Housekeeping maintains rigorous standards for product testing to assure consumers of product quality.”

As the flow of our conversation wanes toward the future, Kathryn remarked on constant momentum—and what this means for both suppliers and retailers in the years to come.

“Our goal has always been to inspire and educate people of all ages by using Cosmic Crisp® as a perfect example of big dreams becoming a reality.”

“The 2020 to 2021 season of the Cosmic Crisp is going to be another exciting year! We are building on many of the partnerships we have in place and creating new ones. The holiday season is the perfect time to highlight such a versatile and beautiful apple, and we have a focused effort to bring inspiration to consumers. 2021 is a big year for space exploration, and the Cosmic Crisp will be helping to celebrate,” she concluded.

On a clear night, I hope that you will wander and look up at the unknown, at the possible, at the astonishing beauty of the universe, and think to yourself: What more can I do?

Until then, we will count on Cosmic Crisp to do it for us.

THEIR WEBSITE
Proprietary Variety Management (PVM) was founded with the purpose of helping each fruit variety reach its fullest market potential, benefiting everyone in the value chain, from breeders and growers, to retailers and consumers. Our mission is to lead the fruit industry into the future. We do this through a consumer-centric approach that brings the best trees and best fruit forward that customers want.