How the Dice May Fall 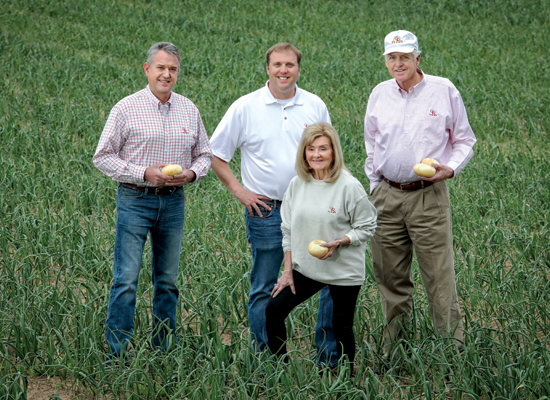 The produce business can turn on a dime at any given moment. Once a single step is planted firmly, ankle-deep in the earth and the seeds have been set to sow—the die is cast. The abrupt nature, swift change, and volatile activity can suddenly turn a well-laid plan in your favor or kick success way down the line—no matter how good your hand is. 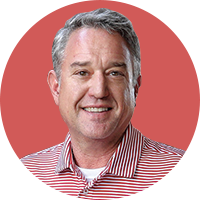 “I’ve learned never to assume anything or take things for granted. This is an absolute must, in my opinion, in order to survive the long run,” Walt Dasher shares with me. And while he is far from a gambling man in a traditional sense, betting is at the very heart of what he does.

Call it what you want—agricultural agility, tenacity, backbone...whatever you choose to equate with the richness of the Dasher dynasty, the deeply laid foundation of a 75 year-legacy has more than endured. As today’s Vice President and Chief Financial Officer for G&R Farms, Walt has been a part of this gamble ever since he could walk.

“Since I was old enough to tag along behind my dad as a kid, I knew this is what I wanted to do when I grew up,” Walt says. “I think this was partly because it’s all I have ever known, but also because even back then I had a vision in mind of what I wanted to achieve with our family business.”

Imagine the waist-high Walt sifting through the dirt in his youth, reading the cards on the table, his ambition already like a divining rod measuring the arable land. It almost sounds like a tall tale. But, as he leads us down the path of his storied beginnings, you can’t help but feel drawn in as he renders his tale and speaks of the Founder and his namesake.

“Back in 1945, Walter L. Dasher, my grandfather, had a vision when he first began growing the sweet onions now known as Vidalia®. My grandfather was the heart of the company. Although he started growing Vidalias in 1945, it wasn’t until the mid-1960s when Walter achieved a status as one of six original growers contracted by Piggly Wiggly Southern to provide Vidalia sweet onions for the grocery chain’s regional stores. And this is what led to the explosive growth of the variety and the success of our family farm,” Walt notes with admiration.

“I've learned never to assume anything or take things for granted. This is an absolute must, in my opinion, in order to survive the long run.”
– Walt Dasher, Vice President and Chief Financial Officer, G&R Farms

The gravity of Grandpa Walter’s vision brought more family into the fold as his sons Gerald and Robert joined the farming business, learning the ropes and helping to successfully grow the specialty onions. After Walter’s passing in 1971, Gerald and Robert renamed the operation to G&R Farms, building on Walter’s passion and continuing to sell and promote Vidalia sweet onions.

“The family knew that the quality and unique attributes of the Vidalia onion could not be ignored, and so we promoted and advocated for the category as the team took G&R Farms from regional to national retail chains,” Walt expresses, adding that the Dasher family is often credited as instrumental in helping make Vidalia sweet onions a sought-after food item. The crop was consistently infused with the sustenance of the Dashers’ passion, and a family farming operation began to turn into a legacy.

When Gerald passed away in 2003, Robert ran G&R Farms with Gerald’s wife Pam, along with Walt—their son, and Robert’s own sons, Heath and Blake—fortifying the family fold.

“As I look back over the years, watching the transition from one generation to the next is very rewarding, and seeing the new minds and ideas coming into the business is a true blessing,” Walt reflects.

2009 took the G&R Farms team to the next level, hurdling a huge milestone when the family started its Peruvian sweet onion program in order to provide retailers with a year-round supply beyond the Vidalia season. Walt shares that he will never forget that first year when the company produced only 45,000 onions. Just 10 years later, in 2019, G&R Farms grew the program to exceed 44 million pounds.

With very strict quality control standards integrated into the company’s blueprint since the beginning, incorporating them into the G&R Farms Peruvian program was only a natural progression. The success of the launch resulted in high-demand and the consistent, premium quality that G&R Farms’ retail partners have come to expect.

Three-quarters of a century after planting those first few acres, the company is continuing to evolve, and not just in the dreamscape of Walt’s vision of the future. G&R Farms is executing a company-wide rebrand to align its core values with an aesthetic enterprise to carry the family’s ingenuity from the seed to the produce department and onto the table.

Motivated by the desire to represent what the company is today, Walt and G&R Farms sought to completely redesign its logo. This fresh design better reflects not only G&R Farms’ current values, Walt adds, but the family’s long-term vision of producing the most consistent, sustainable, and sweet-tasting products on the market.

“The new brand is part of a larger initiative to become more marketing-focused by engaging consumers. The image will appeal to all age groups but especially millennials, the largest generation since the Baby Boomers. This will include a new website and, starting in 2021, we’ll be offering year-round marketing programs geared toward engaging shoppers both in-store and online while helping our retail partners to maximize their sweet onion sales,” Walt tells me.

The rollout of G&R Farms’ year-round marketing campaigns will take industry partners through both the Vidalia and Peruvian sweet onion seasons. Additionally, this will include expanding G&R Farms Growing America’s Farmers program, as well as introducing new seasonal promotions.

“I really enjoy building long-term relationships with our customers. I love knowing we have been able to help customers develop and increase their sweet onion sales from a small program to a major contributor in the onion category, as well as the produce department overall,” Walt shares.

With divining rod in hand, Walt has mapped his way with grace, bringing others along the way and taking the small company from earth to sky. As the exclusive sweet onion brand for Delta Air Lines, you can see how Walt does his tall tale justice. The partnership with Delta has helped to expand the G&R Farms brand recognition worldwide. 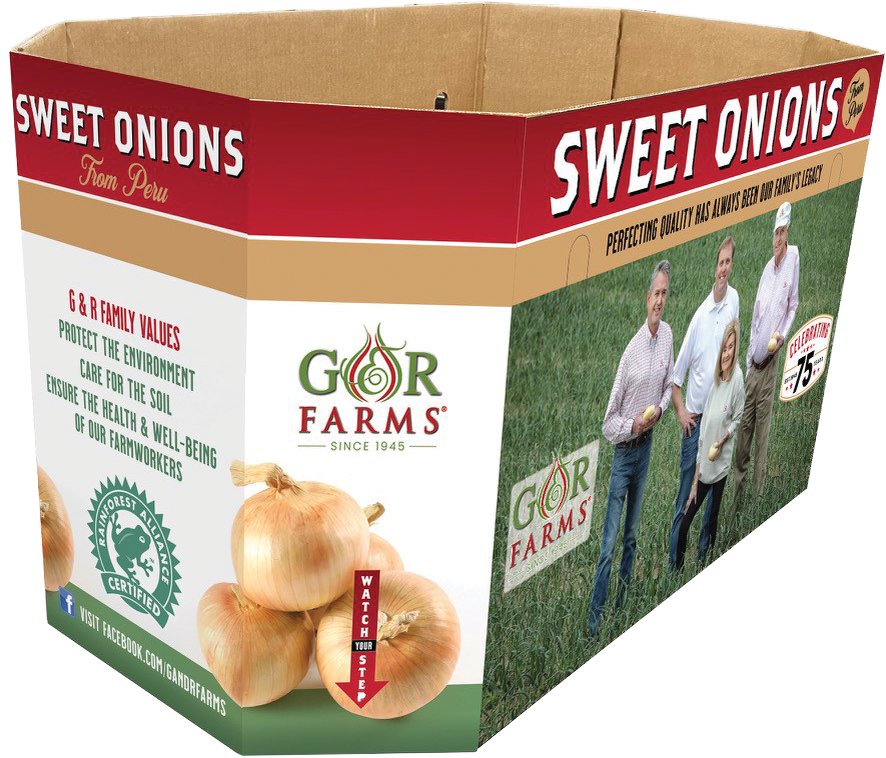 “It has always been very rewarding for me to watch our crop grow from seed to shelf; knowing we can control every aspect of the process always makes me smile,” he says.

And you know that this is the stuff Walt’s dreams are made of.

“I’m proud of the new direction our company is moving in and this includes staff additions like our research and development (R&D) Manager, Cliff Riner, who helps us to perfect the quality of our sweet onions through seed trials that improve flavor and soil analysis while reducing pesticides and fertilizers.”

To layer even more value and passion into the company alongside R&D, G&R Farms has taken strides to achieve new sustainability goals and to obtain Rainforest Alliance Certification because protecting the environment while ensuring the health and well-being of farmworkers is very important to the Dasher family and the company it leads. The team is also in the process of obtaining Fair Trade Certification across its program.

All of these new elements, intentions, and ambitions are at the core of G&R Farms’ ability to endure, innovate, and change—ideals the Dasher family knows are required in order to honor both the legacy that has been laid and the one that is yet to come.

“I think the produce business, or any business, really, is all about honesty—doing the right thing and building relationships,” Walt expresses, taking a beat to cast a look back at what 75 years in the industry looks like for the family-run company. “I am a firm believer that if someone doesn’t have the right mindset in this or any business, it will never work in the end. I have learned that listening versus talking has really helped me provide better service and gain new customers, which is a huge asset. I am also never afraid to ask questions or admit when I am wrong or don’t understand something. I continue to learn something new every day and pray that I always will.”

When the die is cast, at the end of the day, all we have are the values we stand by, the friends we have held close, and the trust we have sown.

With all of his cards on the table and the stakes high, you can’t help but revel in that boldness that radiates from Walt Dasher.

That lore that took root where he sat as a child, divining above the Earth.

WTF Do I Do With Mucci Farms Zukies Mini Zucchinis ?!

WTF Do I Do With Bako Sweet® Organic Japanese Sweet Potatoes ?!

WTF Do I Do With Mayan Sweets® Sweet Onions ?!

WTF Do I Do With Ingredient 4Earth Farms™ Organic Brussels Sprouts ?!

THEIR WEBSITE
G&R Farms in Tattnall County, Georgia, began as a small family farm owned by Walter L. Dasher in 1945. From those modest beginnings, today the operation his sons and their sons have built includes nearly 5,000 total acres of southeast Georgia farmland that produces a variety of crops. G&R Farms is well known for growing corn, soybeans, peanuts, hay, wheat, rye and pecans. They are also home to a 1,500 cow-calf beef herd operation. But a major point of pride for G&R Farms and the Dasher family is their reputation as leaders in the Vidalia® sweet onion industry. Each season they plant and grow some 900 acres of Vidalias®, harvesting between four and five million pounds annually. G&R packages their onions in state-of-the-art facilities on the farm, where quality and safety are the main objectives. G&R Farms has been growing, packing, marketing and shipping Vidalia® sweet onions for nearly seven decades. And their commitment to excellence in this industry is a deep-rooted family tradition.