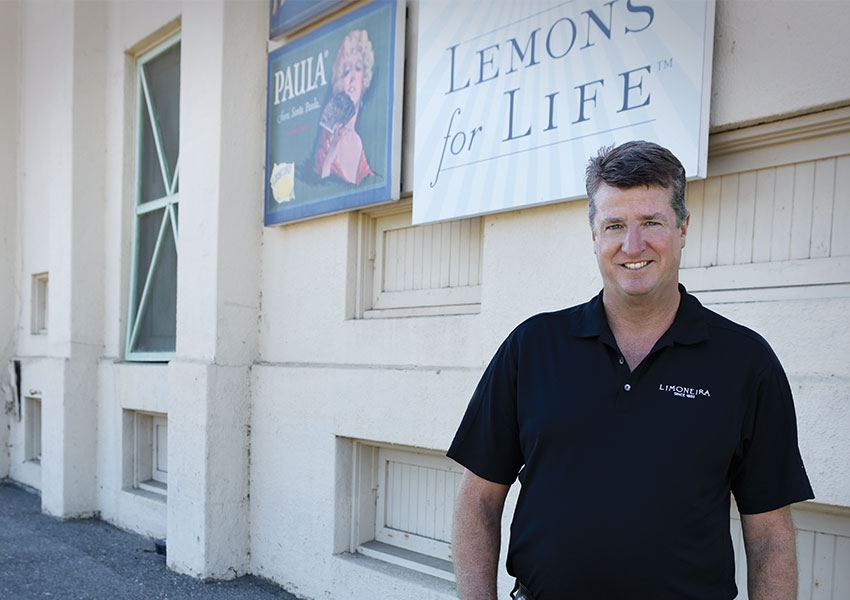 t was one of the scariest days of my life,” Harold Edwards tells me, with a moment's pause. “But it turned out to be one of the best.”

Even on the phone, I can tell he’s smiling. Harold, the CEO of Limoneira, is weaving the story of how the company's One World of Citrus™ program developed into the giant web of global growers it is today. It started six years ago with the historic decision to withdraw from the grower cooperative the company worked with for 117 years—a day which Harold will not soon forget.

“That day, the end panel of our carton stayed the same, but everything else changed,” he recounts. “We knew there was risk involved, and I remember thinking, ‘Will our customers continue to buy from us?’ There was only one way to find out.”

The decision to leave the cooperative, though difficult, launched the citrus company on a journey around the world, with Harold at the helm. 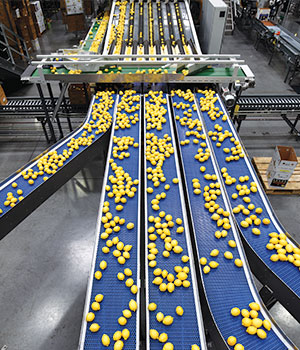 It takes a tough leader to steer this kind of organization, and Harold fits the bill, though he is quick to point out that he has a great crew behind him. He’s got a keen eye for global commerce, having earned multiple degrees in business and international studies, along with a globally diverse background in corporate agribusiness from Ralston Purina International, Purina Italia, Agribrands International, Cargill, Sunkist, Mission Produce, and Calavo Growers. After executing a complex corporate IPO for Limoneira in 2010, he has clearly earned his keep, and managed to keep a good sense of humor along the way.

From the beginning, the driving vision behind the One World of Citrus™ model was to develop a 52-week supply chain spanning the globe. Today, the Limoneira portfolio includes a diverse variety of citrus products including lemons, limes, oranges, pummelos, grapefruit, and other specialty citrus—all of which are sourced and distributed internationally.

“This isn’t a new idea. It’s been around for a long time,” Harold elaborates. “In produce, customers have always wanted product 365 days a year, seven days a week, 24 hours a day. What’s changing now to make this all possible, is the world.”

According to Harold, there is relative peace in the global trade markets, with quickly developing nations starting to participate in commerce and building financial networks. But the key to the program’s success? Increased access to information. Harold explains that with advancements in technology, there is more information sharing in transportation, which has allowed the company to connect the dots all over the world. 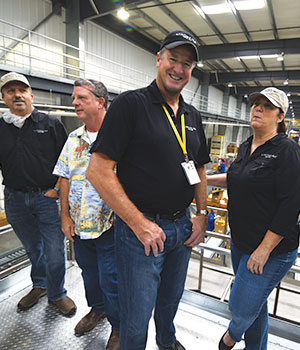 Historically, a company would need to fill a dedicated charter vessel with produce and distribute the entire load from whichever port it landed in. Now, thanks to technology, there are containerized shipping lanes which allow companies to serve smaller markets in regions that, 20 years ago, may have been unknown. With access to real-time information flow, Limoneira is able reach new markets, fill the gaps, anticipate problems ahead of time, and help its customers strategically coordinate supply solutions.

The One World of Citrus™ concept has been growing steadily since its inception. Limoneira kickstarted the program by expanding its domestic grower base throughout California and Arizona. Once the company started to round out its U.S. network, it quickly maxed out supply at three million cartons a year due to capacity constraints from its packing house. As a result, the company made a significant investment into a state-of-the-art facility that was inaugurated in March of this year, increasing its domestic capacity to eight million cartons.

After fine-tuning the tactic on home turf, the blueprint was applied internationally. Like pieces to a puzzle, the company fortified its relationships of nearly 20 years with growers that would complement the growth strategy from Mexico, South Africa, Argentina, and Chile. As these connections were expanded, it was vital for the company to develop local knowledge of the production areas to understand the long term viability for customers. Through this methodical approach, Limoneira quickly became a global network of local communities. 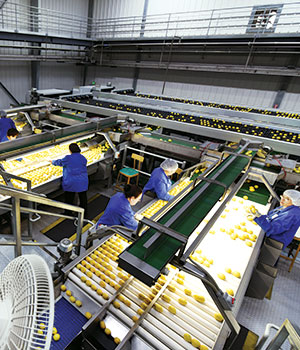 “The most exciting part of this process has been continuously meeting and learning from new partners all over the world,” Harold shares. Then he adds, “There is so much knowledge and sophistication that exists out there, which allows Limoneira to explore new practices and innovate.”

When I inquire about what it really takes to set up this kind of network, Harold pauses thoughtfully. With his impressive history in the game, he possesses a wealth of knowledge to sift through for his answer.

“You start by being a good listener, which requires a willingness to learn, and it ends with a handshake,” he sums up. “Basically, this is about putting the pieces together to create additional value for the end user. Connecting our global customer base to our trees and the trees of our grower partners.”

With an impressive 124 years in the core competencies of growing, harvesting, and packing—one might venture to guess that the company has its strategy dialed in. The Limoneira recipe for providing value to retail and foodservice customers around the world calls for growers who meet the high-quality standards, deliver best-in-class service, and align with the company mission.

The backbone of the Limoneira philosophy is a principled approach to business; though that doesn’t mean it has to be all work and no play. If you are familiar with the company, you’ve likely encountered a few of its bright, cheerful, and sometimes silly marketing campaigns. Harold adds good-naturedly, “This is produce! Everything is rotting. We’re all racing against time. The pendulum of transactional leverage is always swinging from the seller to the buyer. So, you have to do business with integrity.”

"You start by being a good listener, which requires a willingness to learn..."

But this journey hasn’t been all smiles and handshakes. Navigating world commerce comes with its own political challenges and bureaucratic red tape. And, to stay a step ahead of international business, the company went through the demanding process of GLOBALG.A.P. certification, meeting some of the highest quality standards for global commerce in fruits and vegetables.

“The cornerstone of this program is the effort we put into GLOBALG.A.P.  certification. This gives our customer base around the world the assurance they need in the food safety and traceability of our products,” explains Harold. 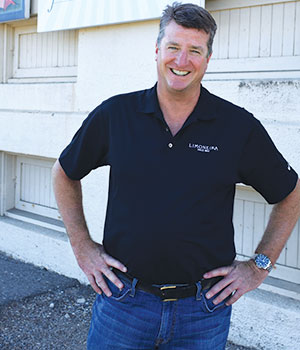 Once an established grower-partner base was in place, Limoneira was equipped to tackle new markets and started adding customers in Japan, Korea, Thailand, Vietnam, China, Indonesia, the Philippines, Chile, Columbia, Peru, and the Middle East. The company would identify market gaps, then provide solutions to customers in those regions. The company differentiated itself by means of out-of-the-box customer support and marketing solutions–such as an extensive blogger network, annual promotional calendars, and regular videos by Healthy Grocery Girl®, aka Megan Roosevelt, the company’s Lemons for Life™ spokesperson–along the way.

So, I ask Harold, “When did you know your strategy was working?” Without hesitation, he dives right in and sets the scene.

Two years ago, as part of a delegation, Harold flew to China to tour tertiary markets, meaning cities of five million people. The group was off the beaten path in the Shandong Province of China; a region Harold had barely just learned about, touring a local grocery store; part of a 500-store chain that Harold was also unfamiliar with. 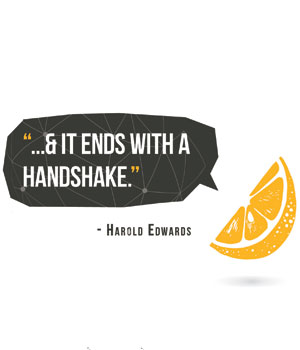 “As we toured the store, the CEO and Head Produce Buyer walked us through the produce aisle, where we saw a pile of lemons. I asked her where the citrus was from, and she replied, ‘Australia.’ I looked at my colleague, Alex Teague, and we knew Australia was out of season. I walked over to investigate and was astonished to find it was a pile of stickered Limoneira lemons,” he describes in amusement. “We all laughed at the irony after we realized that we were indirectly supplying them with our lemons. We ended the tour by agreeing to help them stay a little more in touch with the origin of their fruit."

With the company stretching its reach into the farthest corners of unknown land, even beyond regions of the CEO’s imagination, it finally appeared as though the One World of Citrus™ vision had become a reality. The company has successfully tied together local structures to create a global community. But, Harold tells me, the work is not done yet.

You might say that Limoneira has covered a lot of ground with the One World of Citrus™ program. So, what’s on the horizon for the global citrus purveyor?

“We are in the process of strengthening our roots through acquisitions. We’re evaluating and mitigating the risk, along with identifying some new markets,” Harold tells me. “Limoneira is still expanding its multi-sourced strategy for citrus to serve the world, while adapting to the global market’s desire to find single citrus category capability. Limoneira will continue to make this its focus and business.”

It seems the world is Limoneira’s oyster. With a squeeze of lemon, of course. 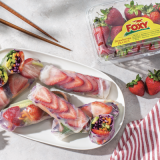 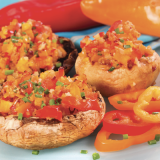 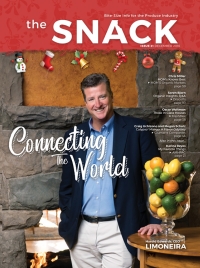 WTF Do I Do With Autumn Glory® Apples?

WTF Do I Do With Butternut Squash Zig Zags?

THEIR WEBSITE
The Limoneira Company has evolved into a global company whose mission is to preserve and promote its tradition, heritage and legacy in agriculture, community development & stewarship.