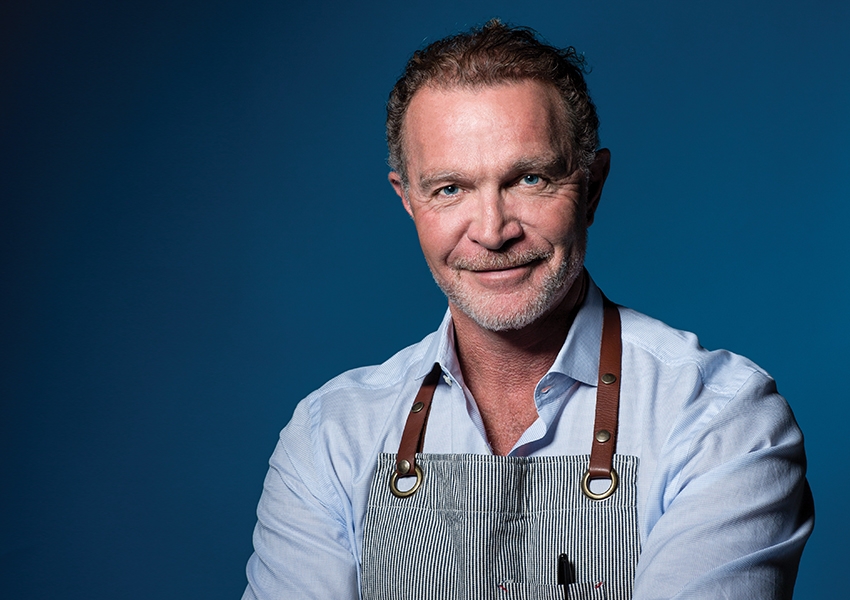 his business exists on a lovely level of complete chaos. It suits me,” Mark McEwan, Toronto Chef, Restaurateur, and retail store Owner, tells me when I ask him why he chose this industry, of all the possible professions. Mark laughs, “If there is anything I have learned, and really harnessed, it is how there can be control within that chaos. I’d like to believe that this is where you find passion.” Mark loves maintaining this balance in the eye of he storm—combining the visual and artistic side of culinary creativity, with the tactile element that you can touch and feel with every bite that you create. This is where Mark lives—inside a profession that is a living, breathing thing.

Simply put: Mark was never going to sit behind a desk.

“But really, I am a simple creature. At the end of the day it is about the taste, the flavor, and the stories you build around food. Taste—that is your last memory, and your most lasting memory, of a meal,” Mark shares when he talks about his vision for the plate and how he engages his guests with flavor. 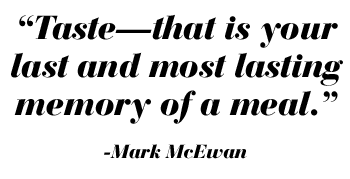 dish both creates a story and tells a story. I love this idea of flavor creating a narrative. And like any narrative, the story speaks to its creator as well.

“I love a humble but sophisticated plate, in terms of quality of ingredients. A bit like me,” he smiles. "Fewer ingredients speak greater volumes than too many. But, within that philosophy, you need to be precise, focused, and strive for perfection.”

From main course entrées, sandwiches, and prepared foods, to retail and catering, this is a philosophy that carries throughout Mark’s culinary agenda and beyond. And that strong appreciation for relaxed, beautiful food is what has set him apart from the pack and helped him to lead it.

“I am not a big proponent of 20-course tasting menus or overly-stylized food. I like a more rustic, natural approach—but a perfect product,” Mark says.

As a classically trained chef, Mark has perfected the art of simplicity on the dish while pairing flavors, protein, and produce, to delight the palate time and time again. For Mark, the most important things are how fresh his fish is, if the scallops are 24 hours old, if the produce that came in that morning has the flavor to hold up a dish, and if the wine he is cooking with has dimension. It is all about the fundamentals. The ingredients that bring the dish together, then elevate it.

ask Mark how he sees the role of produce changing on the menu and how it fits into his personal style. He tells me that he now creates a meal with less protein and more of a vegetable-base than he ever has before.

“Produce for me is the big play on the plate as a general rule, and it is the one that really defines the character of the plate in most cases. That is the way that I like to eat and I find it much more satisfying, interesting, and a much healthier approach,” he says. “I think that this is a mindset that is really taking hold across demographics and dishes, as well.” 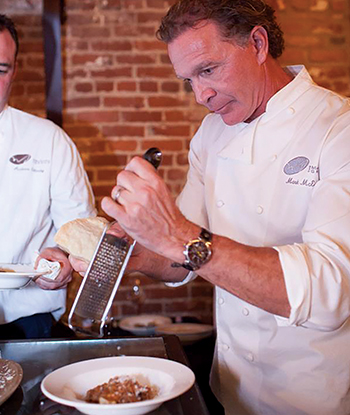 Mark likes a pretty diverse ingredient list when it comes to what he is cooking and what he is eating. But I think it is what he does with defining a dish and cooking with simple ingredients that really speaks to his artistic skills.

Take Brussels sprouts. Mark sets the stage. Shred them on a mandolin and make a chiffonade salad. Thinly slice Brussels sprouts into steamed and sautéed shallots with bacon lardons and you create a hot, fall-type slaw. Serve that with braised pork shoulder and pair with spiced Riesling apples, and you have a huge winner of a plate.

“You take these really humble ingredients and you elevate them into spectacular finished products,” Mark says. “And there are so many wonderful produce items to choose from that can provide the foundation for a dish.”

When I inquire about a few of Mark’s favorite fresh produce ingredients, he tells me he can’t decide. I think, more-so, it’s that he refuses to confine himself to a list. I can appreciate that. But, he does drop in a comment that heirloom carrots and heirloom tomatoes are some of his go-tos.

ark was born and raised through his early teens in Buffalo, New York, which made me ask the question, what drew him to Toronto? To start, Mark’s entire family is Canadian. But in the early 1950s, his father took what Mark now calls “a long business trip,” to Buffalo where Mark was born. In 1975, the family moved back to Toronto based on work. 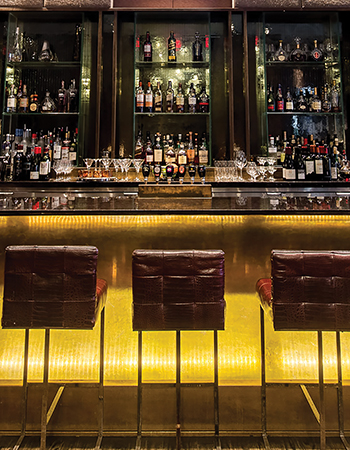 In 1976, Mark started his culinary career, going through the traditional course of apprenticeship—as well as schooling—at George Brown College from 1976 to 1979, with a short stint in Europe.

“Back in those days you really had to make your own map,” Mark shares. “What you really need to understand is that there wasn’t this pervasive internet we have now, or the cooking channel, ;and even much media and trade. And there was not nearly the conversation about food and chefs in the industry that there is today.”

Fresh out of school, Mark’s personal map took him first to Toronto’s Sutton Place Hotel, where, at 25 years old, Mark became the youngest Executive Chef to traverse an upscale Canadian kitchen. And one of few in North America.

In 1985, Mark became a Co-Owner in his first business, Pronto Ristorante, and after gaining the experience he needed from that first venture, he took to the road alone and began building his Toronto empire.

Mark is a man of many accomplishments who rarely sits still. His portfolio includes North 44, Bymark, and ONE, trendy resto-bar Fabbrica, and upscale gourmet food retail store McEwan at The Shops at Don Mills. Mark also added McEwan TD in 2015 to the mix, and took over Diwan in 2015 as well. If you couldn’t tell, Mark is creating his own map within the topography of Toronto.

Want some inspiration at home? Mark has a best selling cookbook Great Food At Home and also Fabbrica, to tease the palate.

“I was fortunate enough to haphazardly fall into a trade that really suited my skillset,” Mark tells me, when I ask him how he found his way to food. “I was very good at it, and enjoyed the passion that it brought out in me.” 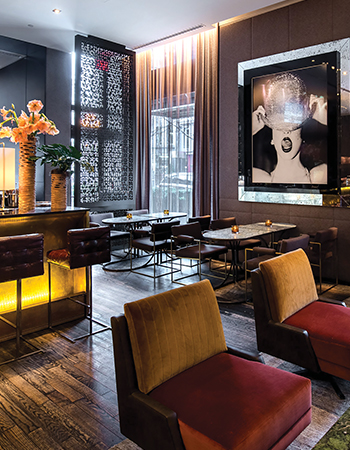 Mark pauses again and smiles, “At 19, what do you really know? I probably knew a quarter of what I do now. But, those first years in the kitchen were an amazing incubator, and I never questioned it.”

And that turned out to be a very good career choice.

“Life is simpler than you actually think it is. I believe in working hard and exceeding expectations. Go to work and have a great attitude. I hire attitude, I don’t hire resumes, and it has always brought me success,” he says. “Overdeliver. Take that expectation in life—and I don’t care what business you are in—overdeliver to your clients, do an amazing job for them, and they will always gravitate towards you. One of the best ways to grow is by emulating successful people—how they make decisions and how they define their vision.”

For Mark, one of those successful people was Chef Joseph Vonlanthen. While Mark was working on his career and studies at the Regal Constellation Hotel and George Brown College, he worked under the tutelage of Executive Chef Vonlanthen as an Executive Sous Chef.

“Joseph was a character,” Mark says. “He taught me the practical numbers side of the business, along with the artistic side. I was writing financials when I was very young, and from a chef’s perspective back in the 1980s, that was not very prevalent. It was a big leg up for me to not only learn how to cook, but to write schedules, manage people and supply volumes, as well as product orders. Joseph taught me that in addition to building my culinary ideology, I could also create a life and a business around it.”

hen I ask Mark why he has grown his business in Toronto and what keeps him here, he tells me that he sees himself as an oak tree: Deep roots and ties.

It only adds to the city’s allure that Toronto is an incredibly competitive market in which to be a restaurant owner. Restaurants are prolific and real estate development is huge, creating even more space and opportunities for retail and foodservice locales to be established. 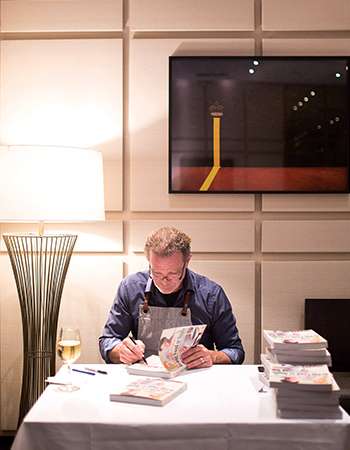 “Toronto has seen a restaurant growth rate of which few other cities in North America have seen, and with no signs of slowing,” he adds. “From that standpoint it can be a little challenging as an operator. You have to really stay on your toes all the time. Having said that, the market cleans out the deadwood, and has a way of challenging and spurring-on the people that are really good. It is a win-win from the customer’s side.”

You can imagine that with Mark’s strong background, range of experiences, and way with words, he can host one hell of a dinner party.

Ask him to create precision on the plate with the most humble of ingredients, and he brings a table to life. So, it is not a surprise when Mark tells me that if the end was near, and he had to choose a last meal, that he would keep it simple and elegant.

“An amazing can of caviar and a double martini,” Mark laughs. “That would be it.”

And I can see him, sitting maybe, in his Georgian Bay cottage where he does much of his personal cooking, planning the possibilities of another exquisite Brussels sprouts dish as another cold Canadian winter wraps around the home in February.

Then again, from Mark’s passion and drive, I believe he may conceive of every meal like it’s his last.

So, cheers, Mark. For this gift to us.