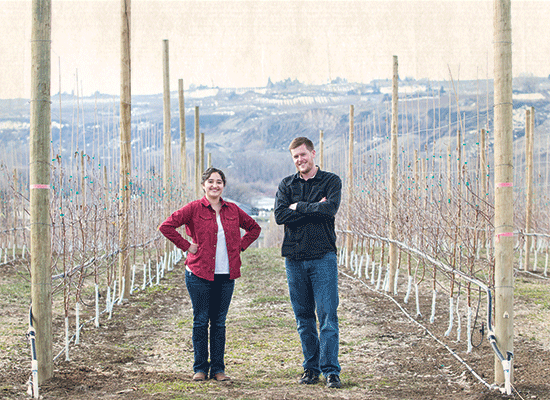 The formula for growing an apple is pretty simple. I’m no expert, but it seems like a healthy amount of sunshine, water, and time does just the trick. Growing an apple that consumers actually want to eat and that retailers want to stock, on the other hand, is a whole different formula but one that Superfresh Growers® has down pat. While its ingredient list doesn’t stray far from nature’s own, Superfresh Growers’ commitment to sustainability is its recipe for not only a successful, category-leading apple crop, but for pears, cherries, and apricots, too.

“Superfresh Growers has always put sustainability and conservation on a pedestal. Everyone who works here is conscious of our impact on the environment,” Tyler Weinbender, Packaging and Art Manager, shares with me. “When I first started working for Superfresh Growers, maybe two weeks into it, I was walking between a bin pile at lunch on my way out for a run and came across Robert Kershaw picking up trash that had blown against the bins. That was eye-opening for me. You often hear about people preaching what they don’t practice, yet here’s the CEO of our company picking up garbage with no one around to see him do it.” 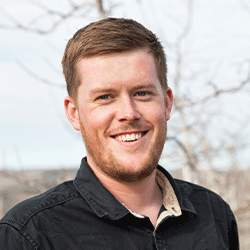 "We like to work in tune with nature, always growing with our eyes on tomorrow."

While our conversation is only in the beginning stages, Tyler and I have already turned to one of the sources of Superfresh Growers’ pride, and rightfully so. You don’t become an apple of Washington’s eye without setting a precedent or two, and Superfresh Growers has more than set a precedent in the Evergreen State. For 125 years and counting, the grower, packer, and shipper has developed an operation that nurtures every facet of its being, from the land it grows on to each and every employee furthering its mission, and proudly declaring, “We are the Force Behind Fresh®.”

“Being smart about water usage, land preservation, material management, and our employees’ own wellbeing ensures that we’ll be able to grow fruit for years to come. We like to work in tune with nature, always growing with our eyes on tomorrow,” Tyler says. 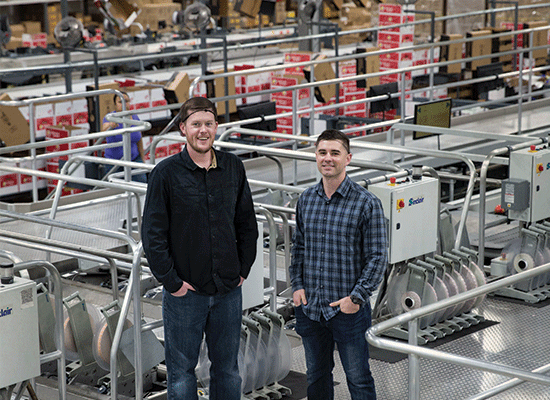 It was this dedication to a successful tomorrow that first drew Tyler to Superfresh Growers’ orchards in 2016. While he was born into produce—his mother’s side of the family has been farming row crops in Eastern Washington for over a century—Tyler’s background is in creativity, which he believes can be applied to all aspects of life…and produce!

“I grew up disking corn fields, raking hay, and distilling mint oil during the summer alongside my cousins. Ironically, I used to trespass on one of the Superfresh Growers Granny Smith orchards to get to and from my grandparent’s house—I didn’t tell them that during my interview,” Tyler jokes. “Working on a farm helped me to see both the hardships of a negative year and the blessings of a successful one, and that’s something that stays in my mind every morning that I walk through the door at Superfresh Growers. Knowing that I can play a role in helping a grower and their family have a successful year fuels my creativity.” 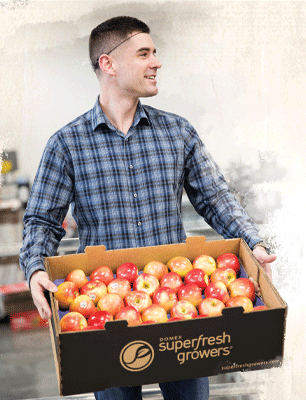 But creativity doesn’t start and end with just Tyler—although he does have an abundance of the stuff. The entirety of the Superfresh Growers team has practice with getting imaginative to innovate the company’s operations and meet sustainability initiatives. In 2018 alone, this included technology, key investments, and better practices put in place to start Superfresh Growers’ next harvest—that of its new crop of organic apples and pears in July—off right.

“We are passionate about preserving our agricultural investments for generations to come. We reduce water usage to optimize this bountiful resource we enjoy in the Pacific Northwest. We minimize agro-chemical inputs so that we can soften our impact on the land and protect the biodiverse ecosystem that thrives in our conventional and organic orchards,” Tyler explains. “Superfresh Growers reduces our plastic usage in as many places as possible, from removing plastic twine and bin liners to designing innovative packaging. We invest in solar energy, and we constantly work to eliminate waste from the orchards to the grocery shelf. All of these efforts are rewarding for everyone involved.” 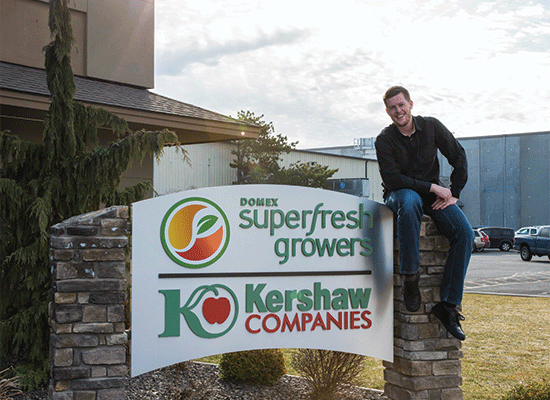 As a California valley girl through and through, experiencing the Pacific Northwest’s mountainous terrain for the first time was a culture shock for my eyes. But where there are mountains, there is snow, and where there is snow, there is a natural source of water come spring. For Superfresh Growers, this natural source runs off of the Cascade Mountains in the form of snowmelt.

“Though water is plentiful in the Pacific Northwest, Superfresh Growers takes multiple steps to regulate its use and ensure we respect the water that flows through our land,” Tyler tells me.

This has culminated in Superfresh Growers adopting the practice of relying on drip irrigation, which Tyler emphasizes cuts water usage by 60 percent when compared to overhead sprinklers. The grower’s team also monitors local soil moisture levels in order to apply water only to areas thirsting for it. As a result, Superfresh Growers has saved millions of gallons of water annually, with some orchards, like those near the Walla Walla River, only using 75 percent of its water rights.

“Being smart about water usage, land preservation, material management, and our employees’ own wellbeing ensures that we’ll be able to grow fruit for years to come."

On top of that, the company has converted 90 percent of its packing lines to meet organic certification requirements. This even included lines that pack non-organic fruit, which means any chemical applications used at Superfresh Growers’ packing facilities are organic certified and have a low impact on the earth. In addition, the company relies on the land’s natural predators (lacewing, ladybugs, spiders, and parasitic wasps) for its pest control—a process known as integrated pest management (IPM) that minimizes the use of insecticides and other harmful chemicals. 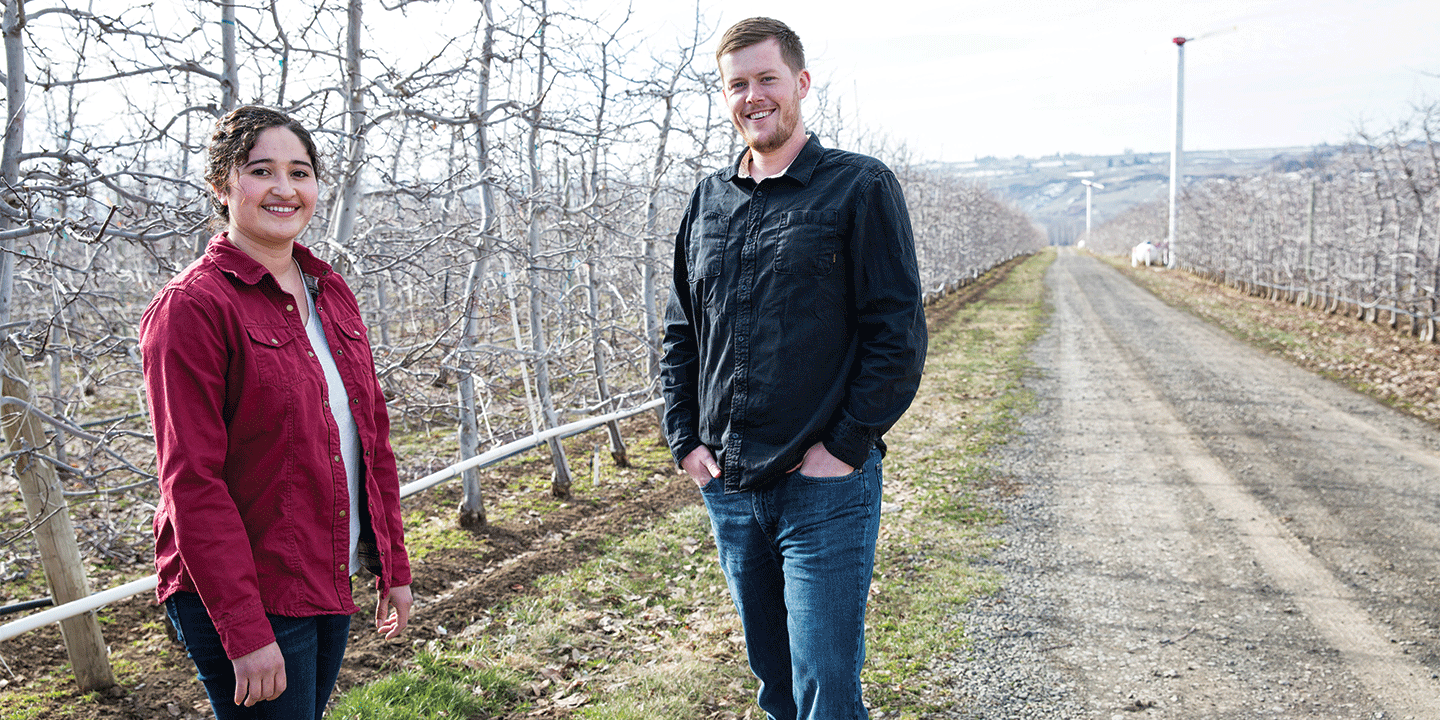 Superfresh Growers also targets waste reduction. As part of this goal, the grower has implemented a pilot that outlines ways of decreasing plastic use by transitioning from plastic twine to bamboo poles to support new tree growth and removing poly bag liners from orchard apple bins. Already, the pilot has removed six miles of plastic per acre across the grower’s orchards and, eventually, the company aims to remove a total of five tons of plastic from Superfresh Growers’ properties. 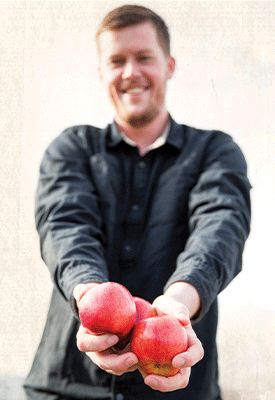 “We enjoy 300 days of sunshine a year here in Central Washington and, as a result, have invested in rooftop solar panels. We have started with 300 solar panels located on the large, elevated flat roofs of our controlled atmosphere and packing facilities, which are ideal for capturing the power of the sun. In fact, we are the first in Washington to have them on top of a controlled atmosphere facility. We plan to expand to produce hundreds of kilowatts per year,” Tyler says.

As fall slowly approaches, all of these practices place Superfresh Growers in a sweet spot for prepping for the harvest of its new crop of organic apples and pears.

“Superfresh Growers is proud to be one of the leaders in the sustainable production of the finest apples, pears, and cherries in the world. We are the largest grower of organic pears in the Northwest and continue to increase our acreage of organic apples,” Tyler notes.

“Superfresh Growers is proud to lead the sustainable production of the finest apples, pears, and cherries in the world."

With big plans always in the works at Superfresh Growers, I ask Tyler if there are a few he can disclose to tide us over until the official apple and pear season begins.

“Oh man, we have some really cool stuff coming down the pipeline. Of course, I can’t share them yet, though. Probably the best part of my role at Superfresh Growers is having the freedom (and encouragement) to explore new ideas, regardless of how impractical or far-fetched they might seem. Trust me, I’ve had some silly ideas. Just last year, we were exploring a new packaging concept using paper, but that ultimately didn’t flesh out past the testing phase. However, we learned a lot from that project, and we’ve already applied that knowledge to several other packaging ideas—including one that looks like it’ll make it to market,” Tyler reveals.

Leave it to Superfresh Growers to already have a solution to one of our industry’s—no, the world’s—most imminent problems: disposing of plastic packaging. But, again, Superfresh Growers has long helped to set the curve on what it means to be a sustainable and successful force in produce—a role that I don’t doubt it will continue to fulfill for another century and a half.

As we wrap up our conversation, I can’t help but feel like Tyler is keeping some news to himself, so I once again ask him what the industry can expect from Superfresh Growers in the next year or so.

“Later, in 2020, we’ll be launching a new brand for all our organic fruit. Our entire packaging suite for organics is being redesigned with an emphasis on recyclability. In a couple more years, you’ll see some exciting new stuff from us in the realm of flavor and innovation. I’ll leave it at that!” Tyler concludes.

What makes a true category leader is a fearlessness when it comes to change, and Superfresh Growers has all the makings of a leader. Just from what I’ve gleaned from Tyler, it’s clear that Superfresh Growers is ready and able to lead the next generation of sustainable growers, thanks to a formula that extends beyond apples, pears, cherries, apricots, and blueberries—a formula so advanced it almost makes me wonder if there’s something in that clear Washington water. Water or not, all I have to say is: Look out, world; Superfresh Growers is here.