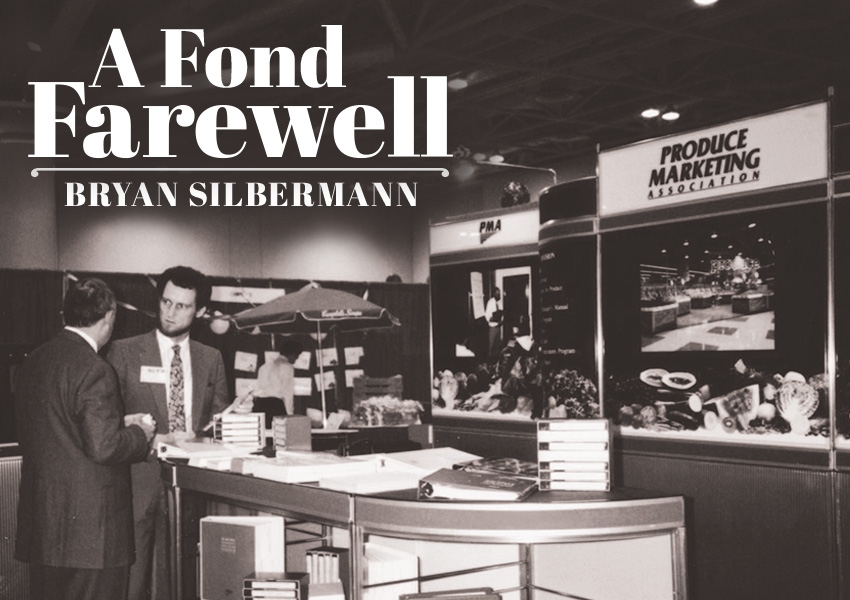 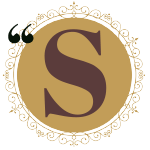 ometimes when people decide to retire, what they really mean is that they are transitioning to a different professional space,” Bryan Silbermann, CEO of the Produce Marketing Association (PMA), tells me as we speak on the phone from different sides of the country. Then he laughs, “When I say I am going to retire, I mean retire.”

If you are looking for a nice, neat breakdown of Bryan’s time with PMA, I am afraid that is an impossible task. For 33 years Bryan has been at the forefront of trade relations, global expansion efforts, food safety initiatives, unprecedented research into consumer demand and groundbreaking trends, as well as marketing campaigns. While some may see retirement as an end, Bryan only sees it as a beginning. But first, before we look ahead, Bryan takes me back. Way back.

Road to the Top

“I got my start with PMA in 1983, to provide greater global perspective to PMA and develop market research that lent focus to areas that remain crucial to our value today,” he says. “But not without the tremendous team that comprises PMA, and not without our membership.” 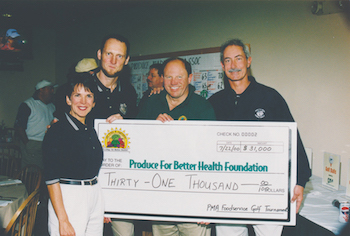 Bryan traversed a host of roles during his early years, handling everything from finance and administration to global trade and public relations. He became PMA President and CEO in 1996, succeeding Bob Carey, a teacher and mentor, who had been President for 38 years.

“Having Bob Carey as a mentor for 13 years was an incredibly wonderful opportunity. He was an amazing communicator and a master at association leadership. To learn people skills from someone that was so great at it, really helped me understand the leader that I needed to be,” Bryan tells me. “Bob had a wonderful way of bringing people together. I consider those years that I knew him as a gift. My hope is that I can impart that knowledge on the next generation of PMA.”

During his tenure at PMA, Bryan tells me that what he is most proud of is seeing PMA grow in the way that it has domestically and globally, and how the strength of the membership has evolved. 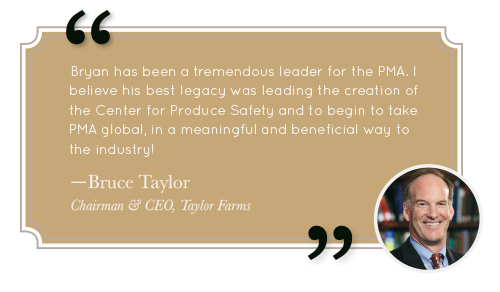 “The service that we provide members, the staff expertise, the milestones we have achieved in integrating technology and innovation into the fresh produce industry, and essentially finding safer and more efficient ways of driving fresh produce consumption—these are the things I feel have really been successful under my watch,” Bryan adds. 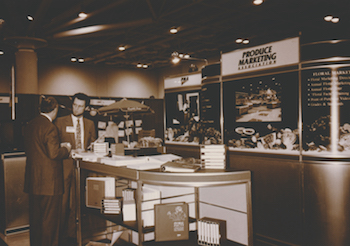 But, Bryan’s accomplishments reach far wider than that. In his time at PMA, he has helped standardize PLU/UPC codes through development, consensus, and industry adoption. He has spearheaded the Produce Traceability Initiative and brought together industry leaders to collaborate on its adoption. Bryan has engaged volunteers on global opportunities and began the import-export committee that became the International Trade Committee (then Council) to Global Strategy and Development committees. And in that same vein, he has partnered with the Foreign Agricultural Service to bring buyers from around the world to Fresh Summit. Now, worldwide growth for PMA reaches across the globe.

On the marketing and communications front, Bryan helped to institute the Produce for Better Health (PBH) program, FNV, Center for Produce Quality, Center for Produce Safety, and Partnership for Food Safety Education. While I talk to Bryan about these accomplishments, specifically PBH, I can tell he is smiling on the other end of phone line. 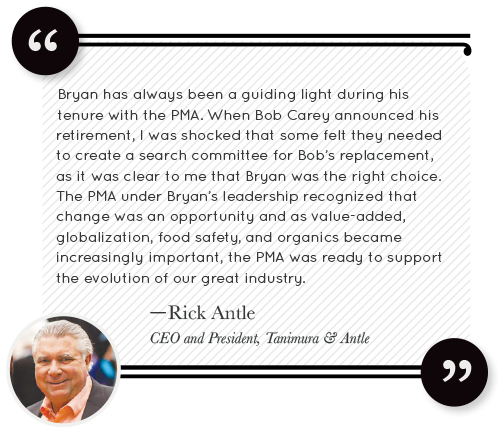 “It’s incredible that something so amazing can begin on the back of a paper napkin,” he says and laughs. “Take PBH for example. Bob Carey and I were on a train traveling from Washington D.C. to Wilmington, Delaware, and we were trying to work out the issues with how the 5 A Day program could be taken nationally and funded. I had a beer and Bob had a scotch. A few months later PBH was launched at the convention in Boston in 1991.”

During the nearly hour we spoke, Bryan walked me through his childhood in Durban, South Africa, and his studies at the University of Chicago and Oxford University, England. Then he truly threw me for a loop. I ask Bryan what he wants to accomplish in retirement, he starts out, “In no particular order...” 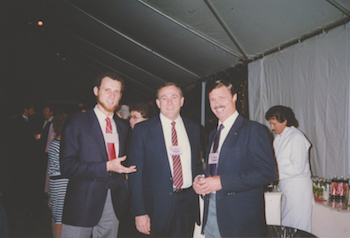 Then Bryan tells me that he wants to go back to playing music, something he used to do before his PMA gig.

“I started off playing in the symphony orchestra when I was 12 years old, mostly playing percussion instruments,” Bryan tells me. “It sparked something in me and all I wanted to do was play everything from classical to rock-and-roll and the blues, to big band music. I have not had much time in the recent years, but in retirement I want to play in a band, in public, in each of the 50 U.S. states.”

He has already played in 16.

“For fun that is,” Bryan says. “I want to travel for my own personal enjoyment and to fulfill my curiosities. Traveling for PMA is amazing, but there is always only so much you can do, and only so much time.”

Bryan begins to talk about his family. With stepchildren of his own, and grandchildren, he hopes to spend more time with those lives he holds most dear. And who could blame him?

“I also used to take part in a lot more outdoor activities. So, I definitely want to add that to the list. I have had so many great experiences from the time I served in the army in South Africa when they’d take us 20 miles out into the bush for training exercises. I also want to go rafting down the Colorado River. You can add hiking and taking long walks on the beach,” he says, and laughs again.

Bryan wraps up the list by sharing his love of photography—something he has dabbled in for much of his life. While most of the photography in recent years has been for work, he is hoping to branch out and see where his eye takes him. 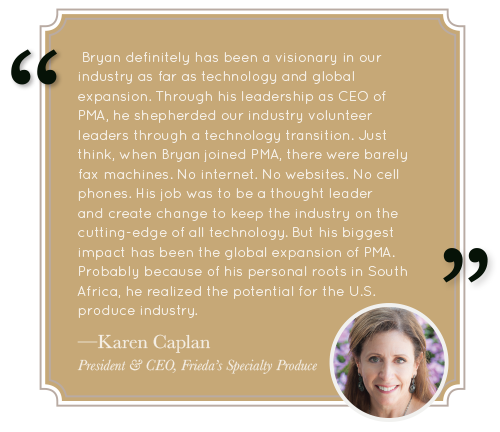 A musician, a photographer, an athlete, a trailblazer, and most importantly, a leader—Bryan’s extraordinary background, gifts, and accomplishments have propelled PMA through more than three decades of growth.

“Today we are an association with more than 3,000 separate corporate entities, and with members in more than 50 countries around the world, along with member groups and committees on every continent,” Bryan says, as he reflects on the unprecedented growth of PMA since its inception.

This will be Bryan’s last Fresh Summit, as he moves toward retirement in January, 2017. As his time winds down as the CEO of the Produce Marketing Association, he looks fondly to the future as Cathy Burns transitions to the helm.

While the words may fail him as he tries to encapsulate his time with PMA, I can definitely tell you that the words of others about him, certainly do not. 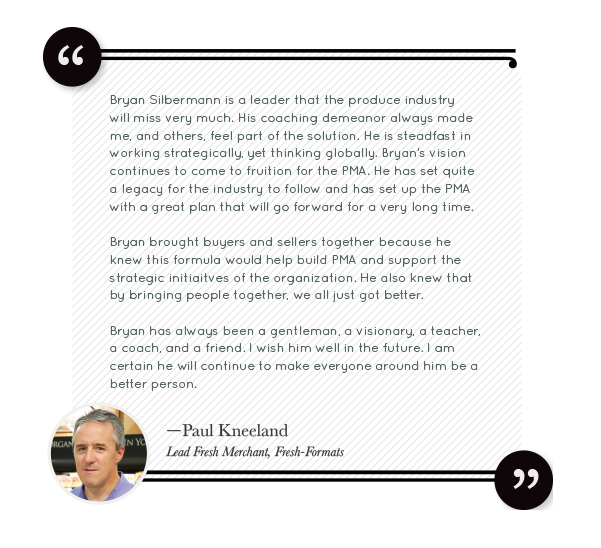 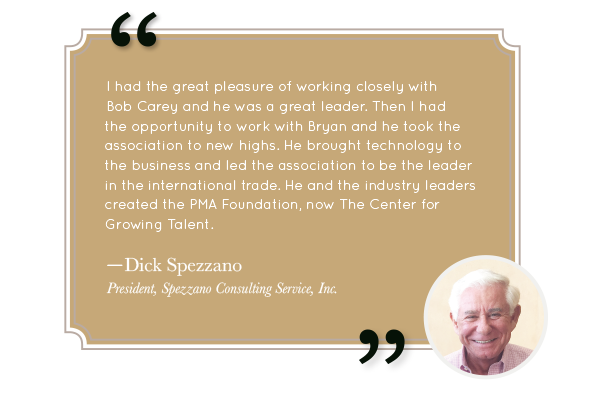 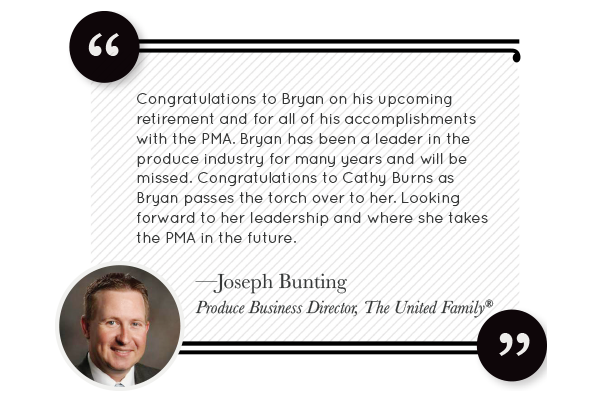 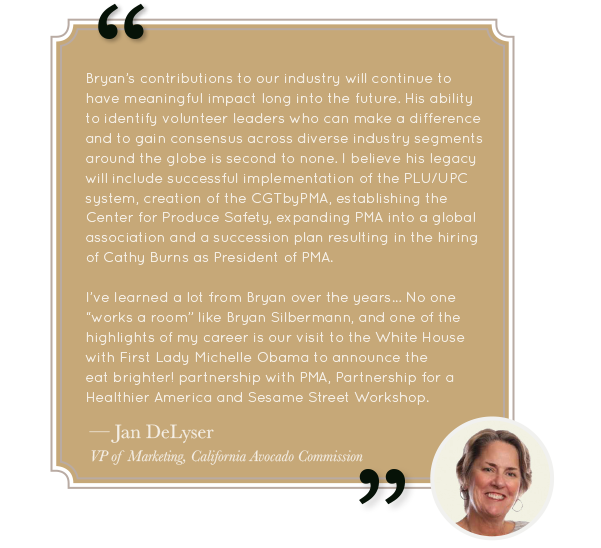 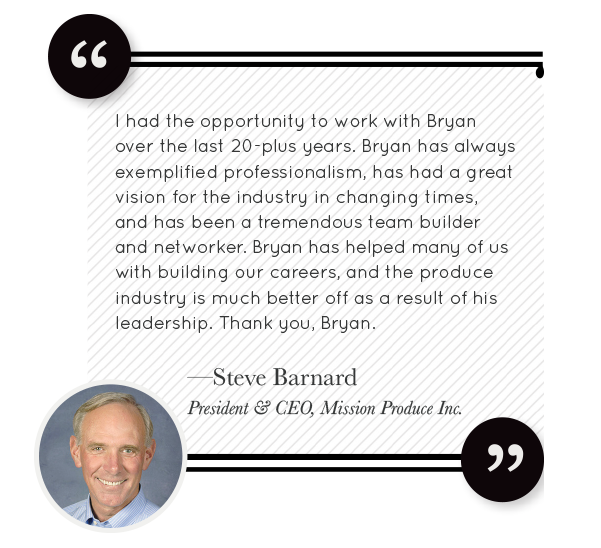 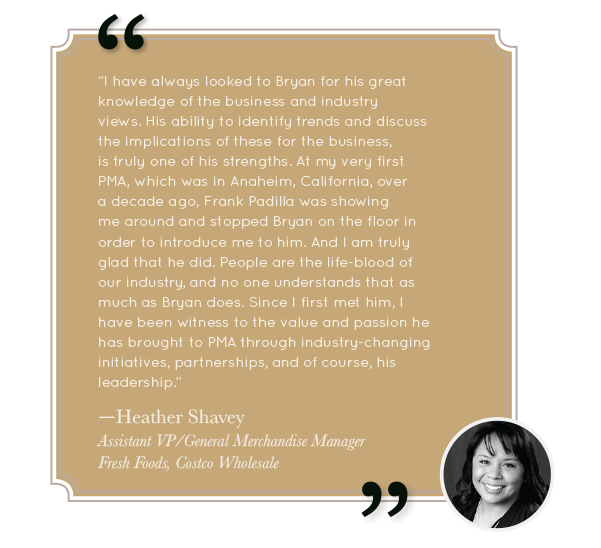 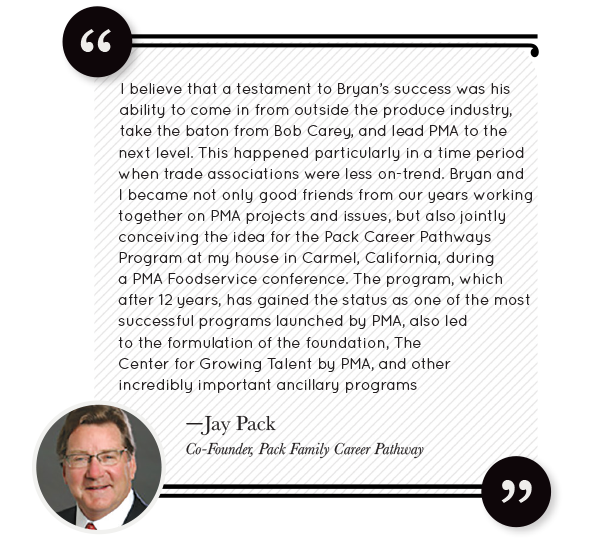 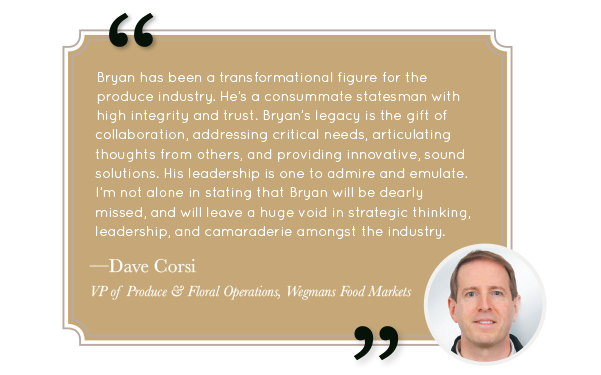 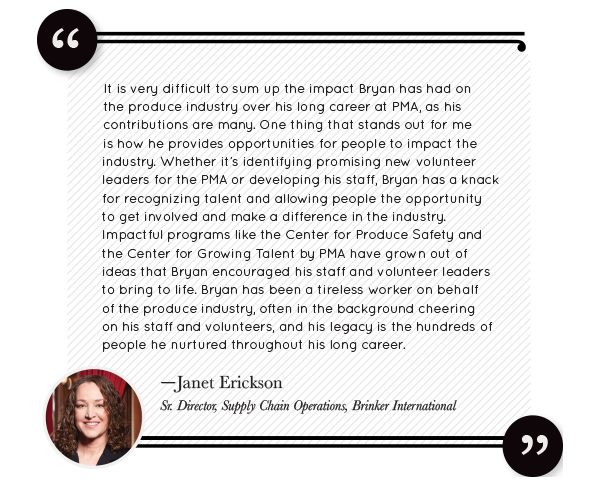 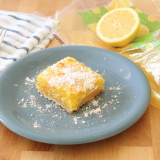 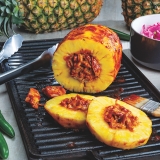 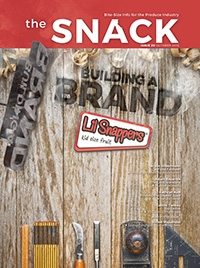 THEIR WEBSITE
The Produce Marketing Association is a trade organization representing companies from every segment of the global fresh produce and floral supply chain.