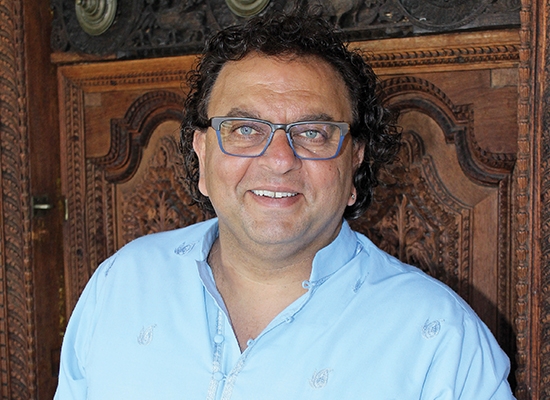 Breathe in deeply: the aroma of piquant turmeric, earthy cumin, and a hint of fragrant mint fill the air. Look around you: rich textiles adorn every surface; intricately patterned tiles embellish the floors; and vibrant chartreuse, fuchsia, and tangerine tones canvas the walls. Where are you? Believe it or not—Vancouver. More specifically, one of the three Vancouver-area restaurants run by Chef Vikram Vij.

An India-born chef with his heart still deeply entwined with the culture he grew up in, Vikram’s passion lies in bringing the scents, textures, colors, and tastes of his country to his adopted home in Vancouver. In Canada, Vikram has become somewhat of an ambassador of Indian cuisine after gaining fame as a Dragon on CBC’s hit TV show Dragons’ Den, with a mission of bringing a well-made curry into each and every dining room.

“Cooking has always been very personal to me, because when I cook, I adapt dishes that my family and I made together in India,” Vikram shares with me when I ask him to delve into what inspires the passion that is so evident when he discusses his work. “Now, my goal as a chef is to bring Indian cuisine into the mainstream in Canada and make it more acceptable as a weekly family dish enjoyed by everyone at home. So, whether you come to our restaurants or not, if you try to cook Indian food at home because of me, then I’ve achieved my dream.” 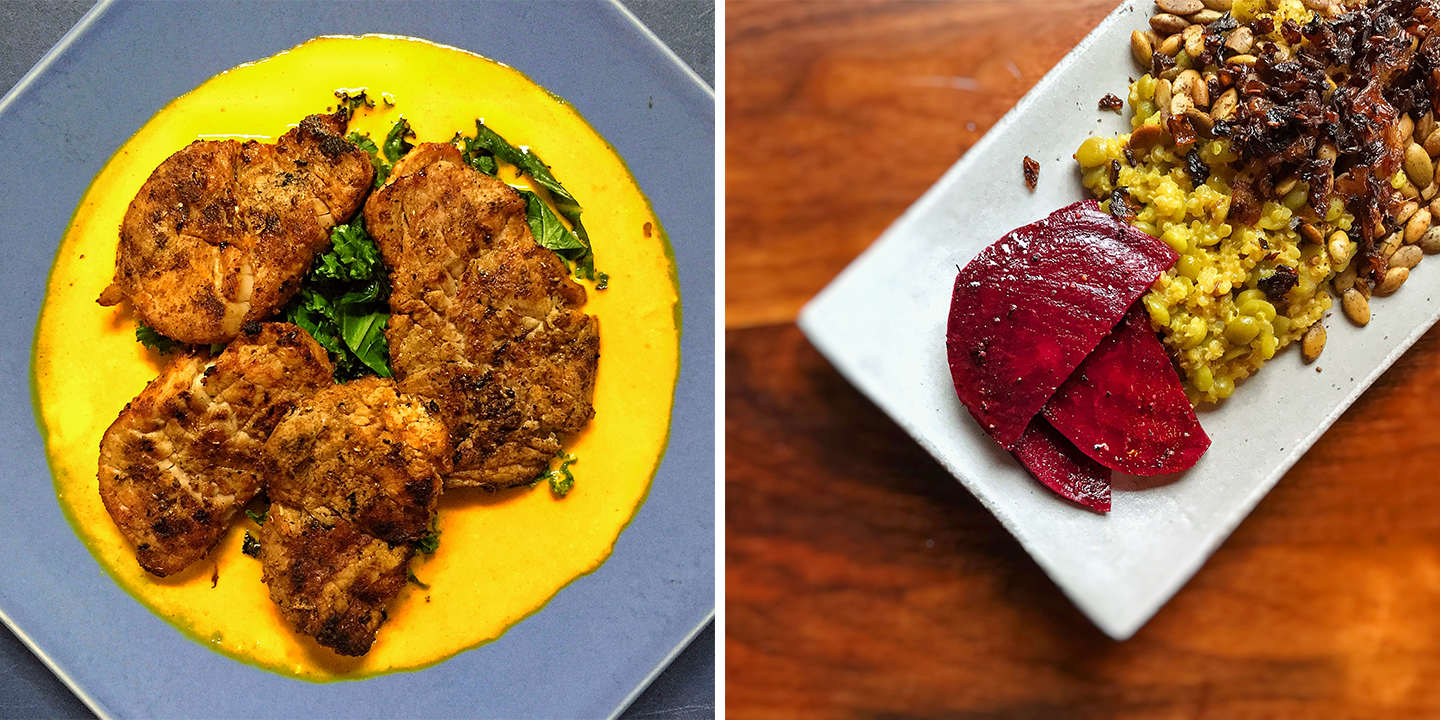 Very early on in talking to Vikram, it becomes apparent that his love for cooking was born from the strong bonds with his family, particularly those bonds with the women in his life. From his grandmother to his mother and aunts, a passion for creating meals a family can gather around seems to have been passed down from generation to generation, culminating in the career of the chef who would become one of Canada’s most easily recognizable culinary personalities.

“I’ve always loved food—everything about me will tell you that! Growing up, all of the women around me who cooked incredible family dinners every night really inspired me,” Vikram shares. “Indian women have the most incredible association with spices and their passion to cook for their families makes those meals taste all the more delicious.”

"Whether you come to our restaurants or not, if you try to cook Indian food at home because of me, then I’ve achieved my dream."

Departing from his mother’s kitchen, Vikram’s next steps would take his spices all the way to an unexpected locale—Austria, where he began studying Hotel Management and then set out to work as a chef. As much as the women in his life became the fuel that would power his career, he tells me that one man, by the name of Ivor Petrak, was the launching pad.

“The one single person who changed the direction of my entire life was Ivor, the former manager of the Banff Springs Hotel. When I was a chef in Austria, he visited the restaurant I was working at and told his server he wanted a spicy dish from the kitchen. Of course, everyone looked right at me,” Vikram reminisces about the moment that helped solidify the path his career would continue on over the next few decades. “I ran and got my spice dabba and made him a goulash. Not long after, he returned to Alberta, sent me a one-way ticket to Canada in the mail, and offered me a job at the hotel. Of course, I took the opportunity—and now here I am!” 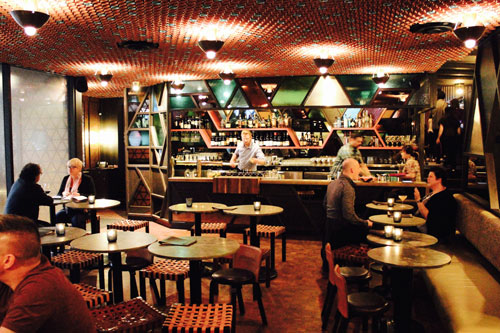 “Vancouver has one of the most diverse international food scenes in North America, so I knew that diners here could be open to the style of food my restaurants have to offer. I wanted to be an ambassador of Indian cooking and Indian spices here,” Vikram explains. “And of course, chefs take influences from wherever they eat as well, so now having the option to incorporate amazing choices for our restaurant from every neighborhood we enter, inspires me to be all the better and more creative with the flavors of Vancouver, every day.”

"I wanted to be an ambassador of Indian cooking and Indian spices."

Of course, it doesn’t hurt that British Columbia has one of the richest farming traditions in the country, with fresh vegetables and fruit, meat, fish, poultry, and, Vikram’s personal favorite local fare—wine—all at his fingertips.

“Local produce and local flavors will always find their way into my cuisine,” Vikram declares confidently. “We have such a wealth of fresh ingredients available to us here in British Columbia, why would we need anything that’s been shipped here after being picked days or even weeks ago? I am such a passionate supporter of our local producers. Our wine lists feature mostly British Columbian wines, we have a great selection of local craft beers, and everything else all comes from suppliers we’ve been working with for decades.”

“We have such a wealth of fresh ingredients available to us here in British Columbia, why would we need anything that’s been shipped here after being picked days or even weeks ago?"

Fresh produce has always been an important part of what makes Indian food so special, Vikram tells me, as much of what the country eats as a culture is vegetarian. But, where many people who cook Indian food as transplants to the culture might take shortcuts with pre-made mixes and packaged spices, Vikram’s strong commitment to local ingredients and sustainability is something that has propelled both he as a culinary personality and his restaurants’ food into the national spotlight. 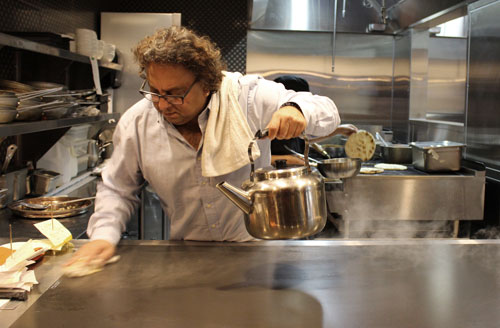 “We’ve always had very diverse and strong vegetarian menus at my restaurants—Vij’s, Rangoli, and My Shanti—and I’d like to influence consumers and other restaurants to use more locally grown-and-purchased produce as well,” Vikram tells me when I ask him to talk about ‘trends.’ “Ingredients like kale or cauliflower shouldn’t be trends; they should be incorporated into meals whenever possible, particularly if they’re local. But, I think rather than a trend, we need a movement towards buying and eating local, as well as a real push for sustainability. Sustainability should be an expectation moving forward.”

With the weight of being an Indian food envoy, local produce advocate, not to mention running three world-class restaurants, collaborating with retailers, and traveling around the world making appearances, it’s hard to imagine this man taking a break—but still, I ask him, what helps you come back down to earth?

"We need a movement towards buying and eating local, as well as a real push for sustainability."

“My bone-in goat curry with chapati and a really great bottle of wine,” he says with a warm smile on his face. “For me—especially when I’m cooking at home—some great Indian music turned up loud and a glass of wine are necessities! I really don’t have time for hobbies, but I try to do yoga in the mornings as it keeps me grounded and helps me prepare for the day ahead. And now that my daughters are older, I try to make the most of our time together, so going for a walk or just hanging out is so important—and I tell them they have to put their phones down!”

If you’re looking for a place to ground yourself, it’s not hard to tear away from the chaos around you when surrounded by the narrative Vikram creates with his restaurants. So, step into his little oasis in Vancouver, step back, and breathe deeply.