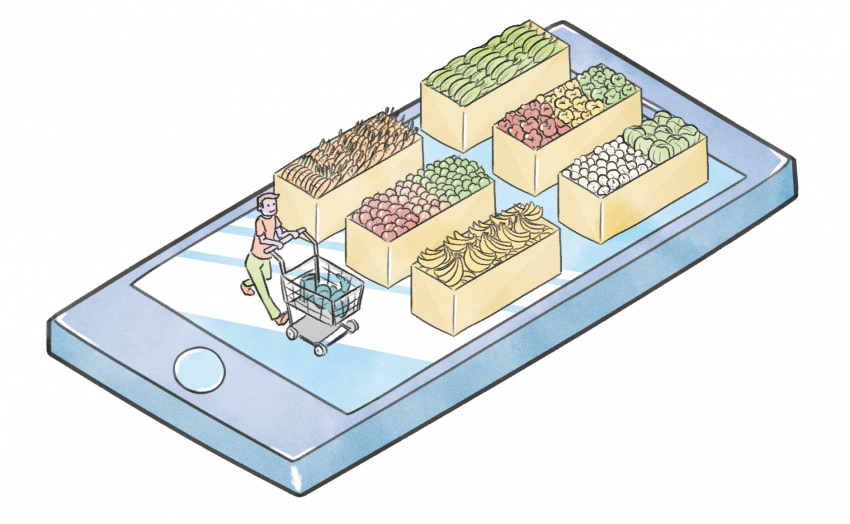 When I began working for Kroger 46 years ago, I couldn’t imagine how significantly the retail produce business would change as the result of evolving technology. I couldn’t have predicted it, and I don’t suppose most other industry veterans could have either. Let’s take a look at some of the more major changes that have come about in Part 1 of this series...

The current in-store produce-ordering process has improved leaps and bounds in comparison to the old way of ordering the store’s needs in a paper catalog—a process in which cooler inventory was recorded to help determine the needs for the next order. Today, most major retailers have advanced their computer systems to the point that a computer-assisted ordering process is in place.

The assistance comes from the produce associates maintaining up-to-date inventories for all items in the system and then letting the computer system recommend their next order quantity based on certain criteria, such as pricing, ad activity, seasonal emphasis, holidays, etc…With the number of individual SKUs that are stocked in most retail produce departments today, it has become unmanageable for an individual to accurately maintain records in detail for each item and to be able to project their needs. Computers, with human input, produce the best results and allow companies to stay in business without having excessive inventory.

Weighing and pricing product when everything was virtually packed in the retail produce department was pretty easy. Even the bananas were weighed by the bunch and a tape was wrapped around the bunch to maintain the integrity of the bunch with a retail price attached. As retailers moved away from packaging most of the product they sold to selling most of it in bulk, they had to lean on new technology. The trend to move to bulk coincided with the introduction of scanner registers and the eventual evolution of UPCs (universal product codes) and PLUs (product lookup codes) assigned to products to track movement and to assign a retail for scaling merchandise. This one area of change has produced tremendous insight for retailers in the areas of pricing, computer assisted ordering, and category management.

Retailers began introducing loyalty programs during the 1990s and began capturing information on what items their customers were buying, how often, and what triggered a response from them to buy more. Today, after 20-plus years of collecting and analyzing customer data, retailers better understand their customers’ buying habits than ever before and can market and price toward maximizing sales. The data helps predict the success of their marketing and advertising programs based on past performance.

By measuring key customer metrics such as frequency of their shopping, size of the bascart (a.k.a. shopping cart), the items they buy, brand loyalty, etc.—more accurate analytics can be performed to determine the success of a marketing program.

One of the most basic parts of the retail produce business is the area involving the retailer’s product offerings, i.e. what they are going to offer up for sale. In the 1970s, the typical retail produce department in a major grocery chain would have sold about 100 items on a typical day, with some products moving in and out as the seasons changed. The basics included lettuce, bananas, tomatoes, and potatoes, along with other basic fruits and vegetables. Today, the typical retail department will offer their customers hundreds of items any given day, as well as seasonal items. There are much fewer breaks in product availability now than in the 1970s, as sourcing from around the world, coupled with improved technology in shipping and refrigeration, make it much more practical to sell products produced in other countries and imported into the United States.

Early in my career, value-added produce was limited at best, with the exception of an occasional, regional producer of coleslaw, which had just a couple of days shelf-life and was delivered direct-to-store due to its perishability. Other than the occasional regional slaw provider, everything else in the way of value-added—cut melons and tray pack corn—were all produced in-store. Today, thanks to technology and food safety advancements, there are many reputable producers of all those products, as well as additional items, all in packaging specifically designed to provide the proper respiration for what’s stored inside, provided proper temperature is maintained. Thanks to advancements in technology, the value-added commodity has moved to the number one or number two highest volume commodities for most retailers and has provided a great option for customers to save on prep time and have provided some great fresh food options to them.

Dan Johnson has 46 years of experience in the retail grocery business, with tenure in Merchandising/Marketing and Operations, as well as 12 years as the Corporate Director of Produce and Floral Merchandising, Sales and Marketing, and as Corporate Director of Produce Procurement for The Kroger Co. based in Cincinnati, Ohio. The Kroger Produce and Floral Merchandising team was responsible for the sales of both produce and floral for the largest traditional supermarket chain in the U.S. The Kroger Co. is one of the largest retail florists in the world.

Dan has been active in the produce industry, serving on the Produce Marketing Association (PMA) Board of Directors 2007–2010 and 2011–2014. He was Chairman of the PMA Fresh Summit Expo in 2012, is currently a member of the PMA Membership Committee, and has previously served as Chairman of the PMA Membership Committee, served on the PMA Retail Board and the PMA Produce Electronic Identification Board, as well as the PMA Technology Committee, etc. Dan currently serves on the Executive Committee of the Produce for Better Health Foundation (PBH), owns Dan Johnson Insights, LLC, and consults within the produce and grocery industry.