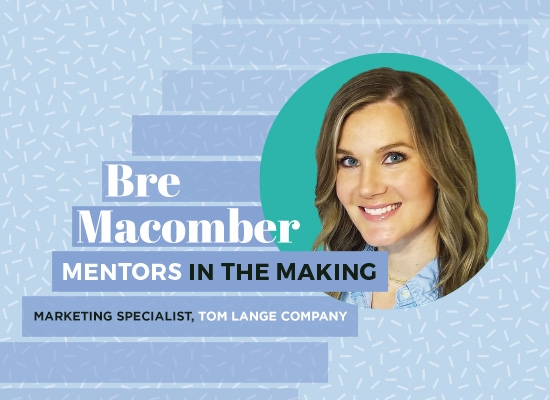 If you were to declare, “I want to go fast!” Ricky Bobby-style, I would assume NASCAR’s speedways were your goal, professionally or otherwise. When Bre Macomber declared she wanted to go fast, however, the racing industry wasn’t exactly what she had in mind, though she did try it out for a bit.

“Directly out of college, I landed an internship with a sports management agency in Charlotte, North Carolina. The agency I worked for represents drivers, sponsors, and teams for NASCAR. I loved the fast pace of the work and it was a great experience, but it was kind of out of left field,” Bre explains to me.

At first glance, NASCAR and the produce industry don’t seem to have much in common—except, of course, Bre, whose name you have probably heard thrown around with increasing frequency. Upon closer inspection, a fast-paced drive is one aspect that translates from the race track to the growing field and is one reason why Bre is on the industry’s radar as a leader of the next generation, and one putting the pedal to the metal at that. Because of this, there’s little doubt that Bre belongs anywhere but our industry—a fact only strengthened when Bre tells me that her jump from sports to fruit and veg was not exactly a leap into the unknown, but a leap back to home.

“Produce has been a part of my family for generations. My grandfather farms and still lives out on the farm, and my uncle and father both work in agriculture as well,” Bre details. “So, when I moved back to Illinois and fell into my role at Tom Lange Company, it was a natural fit because agriculture is in my blood.”

Bre’s first mentor in life was also coincidentally the first to introduce her to the biz: her father, Bill Engel. Bre describes him as a leader by example who set a precedent for just how worthwhile our industry can be if you dig deep.

"My mentors are so significant to me and have helped guide my career path. I can only hope to be half the mentor they have been to me."

“During my childhood, I would watch my dad work, which was my first exposure to the business side of agriculture—the side where we aren’t in the dirt or riding tractors,” Bre says. “He always made sure to build lasting relationships and showed me how to treat each person with the same respect, no matter what title they may have behind their name.”

Growing up under her father’s wing, which included traveling with him on international business trips, Bre witnessed the fruits traits like tenacity and versatility bear in our industry—traits Bre herself has worked hard to adopt.

Taylor Aldridge—Owner and Creative Director for Rarebreed Media and another of Bre’s mentors—then helped her build upon this foundation laid by her father. Bre and Taylor first met four years ago after Tom Lange’s President, Greg Reinauer, introduced them.

“He has been an invaluable mentor to me in the creative and design space, showing me how to pitch relay design concepts in meetings and bring those with a more analytical mindset into our creative world. He also has emphasized that it is so important to explain the ‘hows’ and ‘whys’ that go into the design or branding strategy,” Bre reflects. “Taylor’s brainpower for strategy and his foresight are something of magic.”

This is not to diminish Bre’s own place as the driver of her story, however. Just to stunt a little: Bre was hired as Tom Lange’s first Marketing Assistant in 2012 and has since come to embody the title of Marketing Specialist—all under the guidance of her mentor, Becky Wilson, Vice President of Operations at Tom Lange. Bre describes the moment she met Becky as the stars aligning, and over the last seven years, Bre and Becky have built a 400-horsepower engine of a relationship, thanks to having a boss, friend, and life-long mentor all in one.

"I believe in the power of mentor/mentee relationships and the impact they can have professionally."

“We like to call ourselves ‘The Bs,’ and we are connected in many more ways than simply working together. We learned we both attended the same high school—and yes, we can still perform the school song!” Bre jokes. “Becky has been vital in my professional development and advancement within our company and industry. Her passion for Tom Lange Company and this industry is contagious. She pushes me to continually strive for excellence in every detail, and I have grown mountains because of her. She has left doors open and room for me to step into my own and always supports any crazy idea I might come up with.”

Like many in produce, Bre doesn’t operate on just one gear. Over the years, she’s added running events for the Tom Lange Charitable Foundation, food safety, and more to her marketing wheelhouse under Becky’s direction—direction Bre herself would like to provide her own mentees in the future.

“My mentors are so significant to me and have helped guide my career path. I can only hope to be half the mentor they have been to me. I believe in the power of mentor/mentee relationships and the impact they can have professionally,” Bre concludes.

If life were a race, Bre Macomber would be speeding ahead of the pack—the industry cheering the closer she gets to the finish line. With a style, determination, and a few tricks in the trunk unlike any other in the race, Bre Macomber is one to bet on in the produce fast lane. 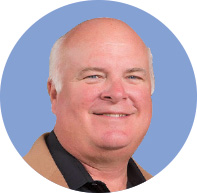 I guess you could say it was ‘love at first sight’ when Bre’s mother presented me with a baby girl thirty years ago!

While Bre did all the typical activities growing up, she seemed to always have a keen interest in agriculture. It must be in her genetic makeup, as agriculture runs deep in our family.

Nothing could make me happier than knowing that I may have provided a foundation for her continued interest. It is even more rewarding now when we both have the chance to connect with the same valued friends and customers that she met during her childhood. It gives me a sense of pride that the values I hoped to instill in my children are being put to use in Bre’s approach to great customer care in this dynamic industry as we work to feed the world! 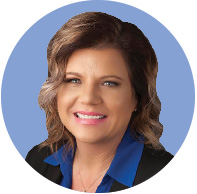 Bre began her career with Tom Lange in 2012 after we advertised for a Marketing Assistant position. During the interview process, I immediately knew she was an ‘old’ soul and that her actual age wasn’t a true reflection of who she was; she came off as much more grounded than most twenty-three-year-olds. Her eagerness to learn everything she could about produce and the Tom Lange organization quickly made her an integral part of our team at the corporate office.

And, once I saw her work ethic, I knew she would be a superstar. To say that she is a self-starter is an understatement. If she doesn’t know how to do something, she will figure it out. Bre can foresee problems and has a fix before anyone knows any better, which is a gift. Through these last seven years, I have seen her develop a passion, commitment to, and love for our industry. Her passion and fresh set of eyes has given me a renewed enthusiasm, resulting in a whole new level of professional growth. I believe that is what makes our relationship more special. You always hear that everyone in the produce industry is like family, and well, that is exactly how I feel about Bre; she is part of my family. 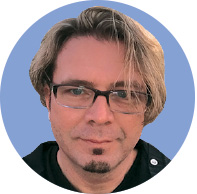 Bre and I have worked together since late 2015. I was brought in to help her with visual design, including a new website, branding, packaging, labeling, and even a tradeshow booth. Bre had been managing everything on her own up until then. I pictured her functioning somewhere between an air traffic controller and a 9-1-1 call operator.

Bre is fantastic. She asks smart questions and wants to understand the reason behind each decision. Once a direction is identified, she is a powerful advocate and fights for the designs that best serve her company.

Managing diverse opinions and demands can be challenging, but Bre has become skilled in both influence and negotiation and has grown to understand the art of patience and timing. Her eye for quality design continues to mature; she communicates what she wants and settles for nothing mediocre.

Bre is a joy to work with. She is organized, calm, collected, and extremely humble. It has been both an honor and a pleasure to collaborate with her on her career, her design needs, and her life goals. 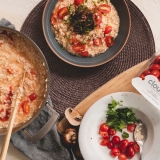 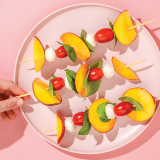 WTF Do I Do With Farm2You™ Peaches 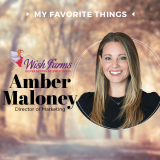 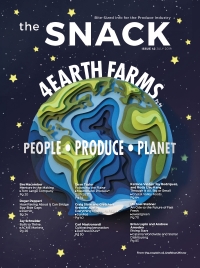